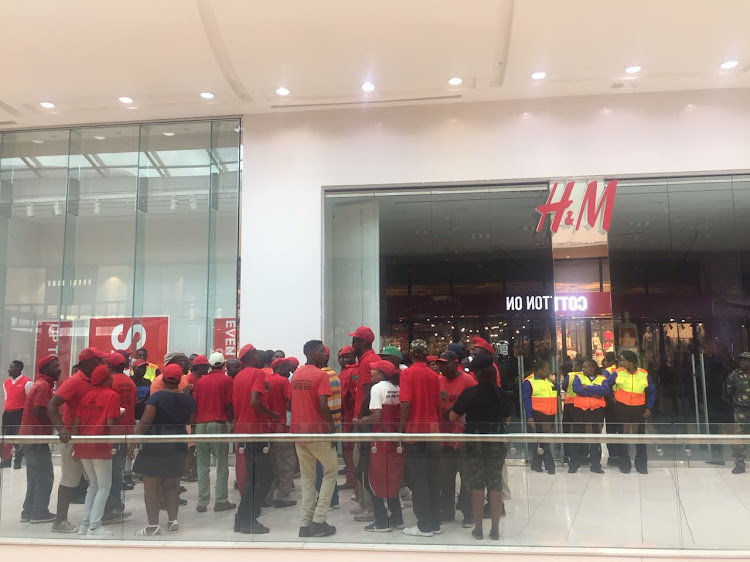 Fidelity Security Services and the South Africa Police Service were deployed to monitor the EFF protest at the Mall of Africa in Midrand.
Image: Jessica Levitt

Just as many South Africans were recovering from the drama caused by the Economic Freedom Fighters over the weekend‚ the red berets yet again stormed one of the biggest malls in the country‚ Mall of Africa in Midrand north of Johannesburg.

This follows several H&M stores around the country being stormed by the EFF just days after the international clothing company withdrew sales of a green hoodie with the inscription "coolest monkey in the jungle" after an ad‚ featuring a black child‚ caused a stir on social media‚ with the brand being accused of racism.

Swedish multinational clothing-retail company H&M would have to "invest in building bridges" after its blunder involving a racially offensive hoodie‚ ...
News
4 years ago

H&M has since closed its 17 South African stores in response and apologised for the offending advertisement.

"Mall of Africa can confirm that an EFF protest action that is aimed at the H&M store arrived today at the mall and the situation is being closely monitored by the mall's security team‚ Fidelity Security Services and the South Africa Police Service‚" said Mall of Africa's Marie Coetsee.

She said although the EFF stormed the mall‚ shops were still operating.

Coetsee confirmed that there was no damage caused at the mall and that no arrests had been made.

Meanwhile‚ the Ahmed Kathrada Foundation said on Monday that the H&M management and marketing division should undergo anti-racism and diversity training.

The foundation disclosed in a statement that H&M has agreed to a meeting between its country manager and the foundation‚ which it said it was considering. The meeting was requested by the foundation.

“The Foundation would use the opportunity to urge H&M to see the incident as a platform to effect change within the company. We want to get an understanding from the South African offices of how they have understood the incident and to get an overview of how they intend to remedy the situation.

"We would also like to communicate to them why they have a responsibility to do more to ensure that the company understands the anger that the racist advert has generated. We intend expressing why it is imperative that H&M’s directors‚ management and its marketing division‚ both globally and locally‚ undergo compulsory anti-racism and diversity training‚ so that there can be a change of attitude within the company around issues related to race‚” the foundation said.