Explainer: What is really happening in Tshwane 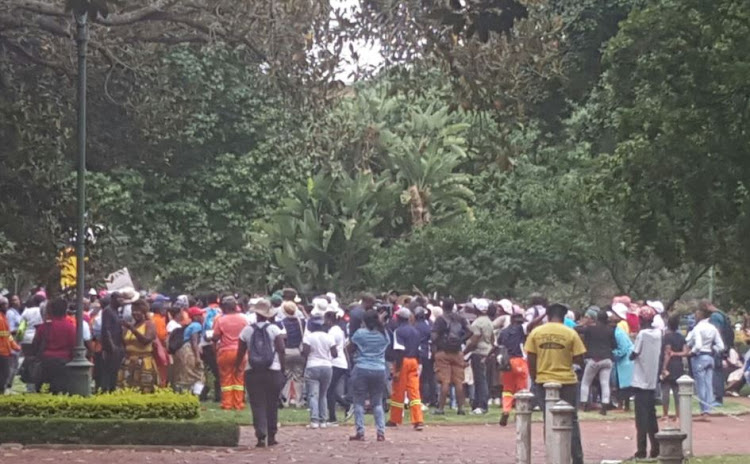 At the heart of the protest expected to hit the country's capital on Friday is the issue of benefiting from the Expanded Public Works Programme.

On Monday‚ a group of disgruntled EPWP workers whose contracts expired torched a Tshwane depot in Mabopane.

The city said around 8am a group of 45 people descended on its waste management depot in Block A‚ Mabopane‚ and broke down the security gate‚ burnt the stock of waste bins‚ an asbestos office and a kitchen.

The group also damaged the security cubicle and the toilet windows. The Rosslyn fire division was quickly dispatched to the depot to extinguish the fire. This groups is part of former "Vat Alles" employees whom the city says are responsible for a series of service disruptions and causing chaos across the city since the beginning of the year.

Tshwane to write off R754m debt

The City of Tshwane will write off R754-million in debt incurred by poor residents in the council’s Mawiga Zone.
News
4 years ago

The EPWP is a national initiative aimed at reducing unemployment and alleviating poverty through the creation of short-term work opportunities using labour-intensive methods.

The new administration found that the EPWP was used for political gains and not to empower the people it was meant to service.

Executive mayor Solly Msimanga went on a campaign and managed to register more than 120‚000 potential beneficiaries on a central database and renamed the programme Gata Le Nna‚ which means‚ "Walk with me." One of the amendments to the revised policy included the selection of eligible beneficiaries through an open and audited lottery-like system.

Solly Msimanga‚ the Democratic Alliance's mayor of Tshwane‚ on Wednesday urged the African National Congress to distance itself from a death threat ...
Politics
4 years ago

In December Msimanga‚ oversaw a lottery of over 3‚000 beneficiaries for the EPWP‚ some of whom began their duties at the beginning of the year.

There have been threats from disgruntled groups whose contracts have ended.

A poster was shared on social platforms this week with a warning message: "City of Tshwane will be shut down on Friday 26 January 2018. Please all shops and schools around must be closed due to EPWP Vat Alles strike. Whoever opens it‚ will do it in his/her own risk. Yours sincerely EPWP Vat Alles."

"Vat alles" is an Afrikaans expression meaning "Take it all."