Anger mounts over damage to iconic Mzoli’s restaurant during protest 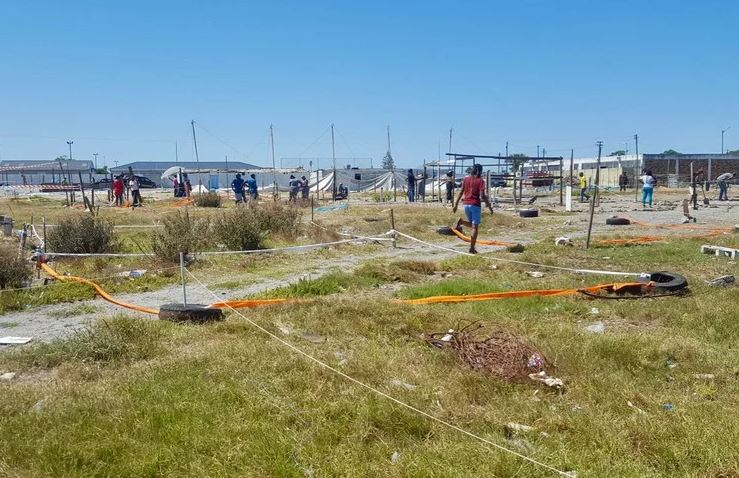 A group of backyarders have laid out plots to occupy open land in NY112, Gugulethu.
Image: Mary-Anne Gontsana

South Africans have taken to Twitter to express their unhappiness over the burning of famous eatery Mzoli’s in Gugulethu‚ Cape Town‚ during a protest over land.

GroundUp reported that‚ on Sunday‚ Gugulethu residents expressed their anger over a lack of housing by blocking the N1 with a bus shelter and bricks‚ and by burning tyres.

Residents also forced churchgoers to remove the Gospel Church of Power constructed of wooden planks and corrugated iron sheets to make way for shacks to be built.

Attempts to occupy three pieces of land in Gugulethu have been ongoing for over a week.

Community leader Sipho Hemeni told GroundUp that he and other homeless residents wanted the land.

“Government doesn’t want to build houses for Gugulethu residents‚ who are mostly out of work‚ and crammed into small houses with their extended families.”

Van Wyk said tyres were still burning on the road on Monday. Several businesses and vehicles had been torched.

“Four suspects were subsequently arrested for public violence. They are expected to appear in court soon‚” Van Wyk said.

Fans of Mzoli’s place took to Twitter to express their unhappiness about the damage done at the restaurant.

Athi Mthongana posted a video of the incident:

Mzoli's daughter, Sisanda Mangele who has taken over from her dad during these mop up operations says a group of residents stormed the street and started burning tyres. Not much damage inside. #GugsProtest pic.twitter.com/Qw3Te0lDk1

It's been crazy, for the past few weeks. They want to build on all vacant pieces of land in and around Gugulethu. Public Order Policing prevented them, this morning, and they ended up going on a massive rampage.
With uTa Mzoli, though, I suspect unyawo lwemfene...jealousy

Devastated that some idiots in Gugs have burnt my partner Mzoli’s butchery down. It’s an institution. #mzolis (Thread)

#Mzoli
I don't understand. Mzoli has created thousands of jobs but "OUR PEOPLE" destroy his place and tomorrow when the tourists remain in the CBD, people will claim lies. Hurt beyond tears. pic.twitter.com/CucRF6Mtg2