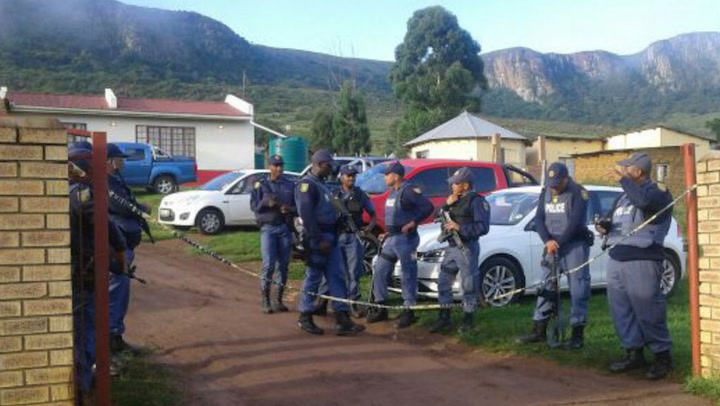 A mother is mourning the loss of three sons to police fire‚ as task force officers swooped on their land during investigations into the brazen attack on the Ngcobo police station.
Image: Supplied

Noluvo Mancoba‚ who co-founded the controversial Mancoba Ministries Church with her late husband‚ is mourning the loss of three sons to police fire‚ as task force officers swooped on their land during investigations into the brazen attack on the Ngcobo police station.

The church‚ also referred to as the Mancoba Seven Angels Ministry‚ was run by the seven Mancoba brothers.

The brothers' mother told the Daily Dispatch newspaper from her Ngcobo home that two of her sons‚ Philile and Xolisa‚ were innocent.

“Even the three [Thandazile‚ Kwele‚ Mfazwe] whom they [police] found with pistols never fired any shots‚” she said.

Asked whether she "also believed" her sons were criminals‚ she told the Dispatch: “Thandazile and his gang were apparently feared in this area but the other four killed that night‚ including my (other two) sons‚ were innocent.”

Eastern Cape police made another arrest on Wednesday morning in connection with the police massacre at the Ngcobo police station a week ago.
News
3 years ago

Soon after the police swoop on the church property‚ the present-day leader of the church‚ Banele Mancoba‚ said he believed his eldest brother Thandazile could have been involved in the police station attack. He told SAFM News‚ "I didn’t know that there were guns here . . . The sad thing is he left the problem to me and now I must clean up the mess."

Commenting on the mom's assertions‚ Hawks national spokesman Brigadier Hangwani Mulaudzi said: “The matter is under investigation and we are not going to engage in any public spats.”

While sympathetic to the mother's grief‚ the Police‚ Prisons and Civil Rights Union said the force used by their members was proportionate to the danger they were facing.