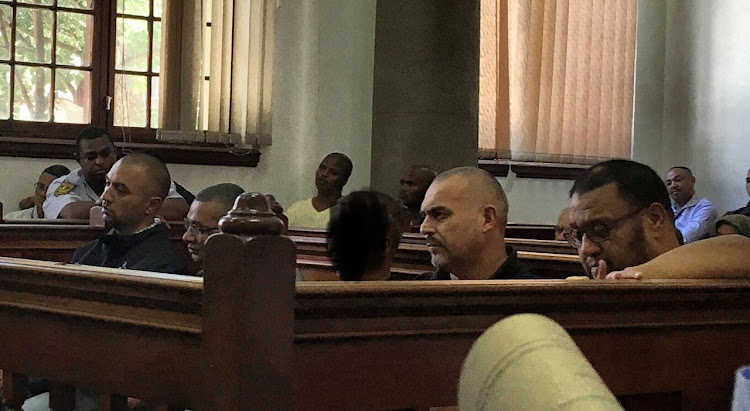 An alleged Cape Town extortion racketeer was arrested on Monday night after an alleged assault and intimidation incident in Diep River on Wednesday.

It is understood that the man is connected to a grouping which has tried to take over Cape Town’s nightclubs‚ which is controlled by alleged mafioso Nafiz Modack and alleged Sexy Boys gangster and convicted murderer Jerome Booysen.

The man‚ who recently appeared in court on extortion and intimidation charges‚ was recently released from Pollsmoor after a prolonged bail hearing in the Cape Town Magistrate's court.

The conditions of his release were that he should three times a week report to a police station near his home in the northern suburbs of Cape Town and that he may not go near any nightclubs or restaurants in the city centre‚ Sea Point or Camps Bay.

For the first time since December‚ five alleged Cape Town extortionists sat down to a dinner which did not consist of Pollsmoor Prison gruel.
News
4 years ago

Since 2015 Cape Town’s nightclubs have become the centre of a territorial dispute between a long-standing security grouping headed by alleged mafioso Mark Lifman‚ alleged Sexy Boys boss and Booysen’s nemesis brother Jerome “Donkie” Booysen‚ and bouncer boss André Naudé on the one side and the grouping headed by Modack and Booysen on the other side.

Family sources have alleged that the Booysen brothers' fallout was the result of the younger brother being undercut by Lifman and Donkie when they were still associates and that this was evident when South African Revenue Service court papers showed the value of assets held by Lifman and Donkie.

But an affidavit presented at the Cape Town Magistrate's Court written by Lieutenant Colonel Peter Viljoen of the Western Cape Hawks's anti-corruption task team alleged another reason for the spat‚ which he said was the result of Donkie “playing a part in a drug transaction that duped Colin Booysen out of lots of money”.

A man suspected of being a kingpin in Cape Town’s underworld‚ who faces extortion charges related to nightclub security‚ was granted bail on ...
News
4 years ago

A bail application by alleged extortion syndicate boss Nafiz Modack was on Thursday postponed amid confusion over who among state officials was ...
News
4 years ago

Modack ‘starving’ in prison as he awaits bail

Alleged extortion syndicate boss Nafiz Modack has allegedly been starving in prison as officials refuse to serve him Halaal food.
News
4 years ago