Trapped in Bholobholo without a toilet for 10 years

City says sanitation and water taps will be installed in May 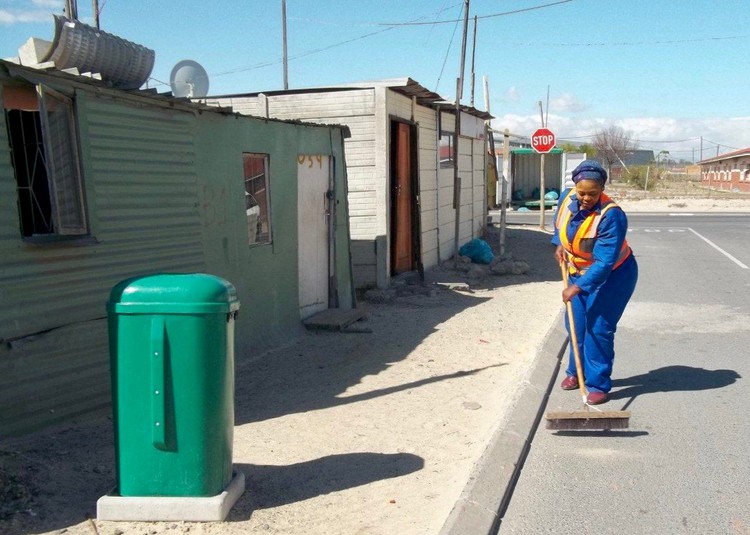 Zingiswa Tshwela sweeps the informal settlement. Since 2009, she has lived in a shack without access to a toilet. Some in Bholobholo have lived this way for even longer.
Image: Vincent Lali

In Bholobholo informal settlement, Mfuleni, 16 families live without toilets. They share one water tap with local braai meat vendors. There used to be three taps, but two are damaged. They draw electricity from nearby houses.

One of the residents is Zingiswa Tshwela. She sweeps the streets and cleans the informal settlement for R2,400 a month. She is employed by Macho Group, a company contracted by the City of Cape Town.

She lives in a shack with her jobless husband, his three brothers, and her two-year-old son.

“I was having difficulty paying rent, so I made a decision to buy the shack [in 2009] from a shack dweller who was leaving for the Eastern Cape,” says Tshwela.

Residents of informal settlements in Dunoon‚ Cape Town‚ pushed two shipping containers into the road at the weekend to make space for new toilets and ...
News
3 years ago

A neighbour charges her R500 a month for electricity to cook, play her TV and light up her shack. “Most of the time we don’t use the fridge because it eats up electricity,” she says.

As there is no toilet, she uses an open field, a 20-minute walk away. Tshwela says there are toilets nearer, but the owners no longer allow them to be used. “They are tired of us,” she says.

“Imagine walking for 20 minutes to the field while you have a runny tummy,” she says. “You squat and nervously look around while you relieve yourself in case a thug emerges from nowhere to harm or rob you.”

Her husband accompanies her if she needs to go at night.

Luthando Tyhalibongo, media manager at the City of Cape Town, said, “The City is currently busy with designs for the installation of toilets and water taps … Toilets are expected to be supplied at the end of May 2018, if all goes according to plan.”

“It should be noted that the community refused other typologies of toilets and said that they would rather wait for full-flush toilets,” said Tyhalibongo.

Tshwela said residents had rejected chemical toilets “because they smell”. We want flush ones,” says Tshwela. She said residents were also afraid if they accepted other toilets the City would never install flush toilets.

Meanwhile, Xoliswa Bhukaza puts a nappie on her two-year-old son before he goes to bed at night. During the day he uses a bucket.

“We want to leave Bholobholo and stay in a place where there are toilets, but we have no money to rent or buy a house. It is not nice to stay here,” she says.

Phumeza Kayise, who also works for Macho Group, has been living in the informal settlement since 2007. She says she wants to leave Bholobholo, but she can’t afford to rent anywhere.

Yvonne Halile lives in a shack with her husband, their baby and two children, aged three and 10. She is without work. Although her husband has a full-time job at Shoprite Hardware in Brackenfell, she says, “We still struggle to get money to buy electricity [from an RDP house owner nearby].”

She arrived in Bholobholo in 2014. “My father-in-law bought us the shack because we could not afford to pay rent,” says Halile. “The only good thing about staying here is that we don’t pay rent.”

Of all the heartbreaking ways a child can die, suffocating in a pit of human waste must be one of the worst.
Opinion & Analysis
3 years ago