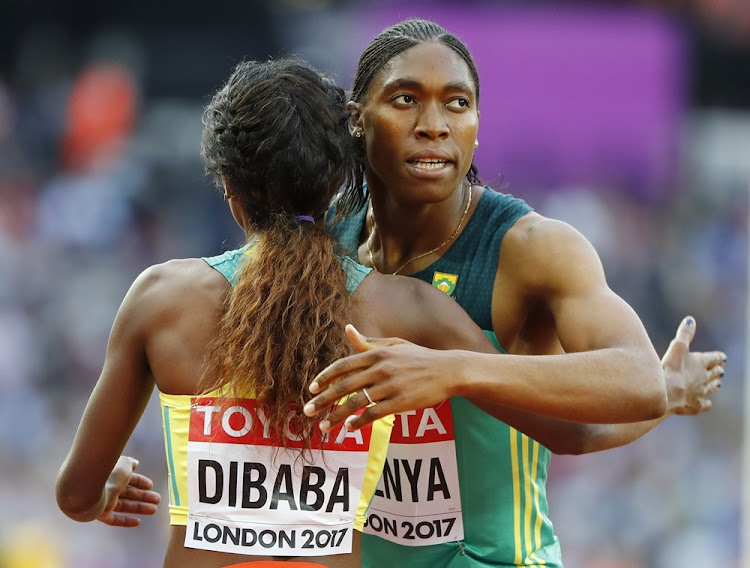 Genzebe Dibaba of Ethiopia and Caster Semenya of South Africa react after the 1500m race in London on 7 August 2017.
Image: REUTERS/Lucy Nicholson

That is how Parliament’s presiding officers on Sunday described regulations passed by the International Association of Athletics Federations (IAAF) that will “stifle” Caster Semenya’s reign as a champion athlete.

Semenya is the reigning world and Olympic 800m champion.

Top international athletes have rallied to Semenya’s cause against the new rules to compel women athletes with high levels of naturally occurring testosterone to take medication to reduce them‚ the Sunday Times reported.

The government is planning to lobby other African countries as it prepares to wage war against the International Association of Athletics Federations ...
News
4 years ago

“Speaker Mbete and Chairperson Modise have called the targeted introduction of the regulations as unjust‚ sexist‚ dehumanising and should be condemned by all human rights proponents in the world. Physiques of African women have and continue to suffer unjustified and racially humiliating scrutiny and mockery. This must stop‚” said the statement.

“Parliament strongly believes that the IAAF’s latest regulations to prescribe a maximum of five-nanomoles of testosterone per litre of blood and a hormonal treatment of women athletes with higher measurements‚ particularly in categories where Caster Semenya currently reigns as a champion for nearly a decade‚ are blatant efforts to eliminate her.”

The presiding officers called on sister parliaments under international legislative bodies‚ such as the Commonwealth Parliamentary Association and the Inter-Parliamentary Union‚ to take a stand and reject the IAAF's “blatant old-fashioned prejudice”.

The regulations threatened not only Semenya’s career but also a generation of young girls from rural and disadvantaged backgrounds who were inspired by the athlete to break the proverbial glass ceilings in the careers of their choice‚ said the statement.

The “anti-Caster” clause introduced by the International Association of Athletics Federations (IAAF) was slammed by the National Youth Development ...
News
4 years ago

Caster Semenya will need to reduce her natural testosterone levels‚ by use of daily hormonal contraceptives‚ if her future times on the track are to ...
Sport
4 years ago