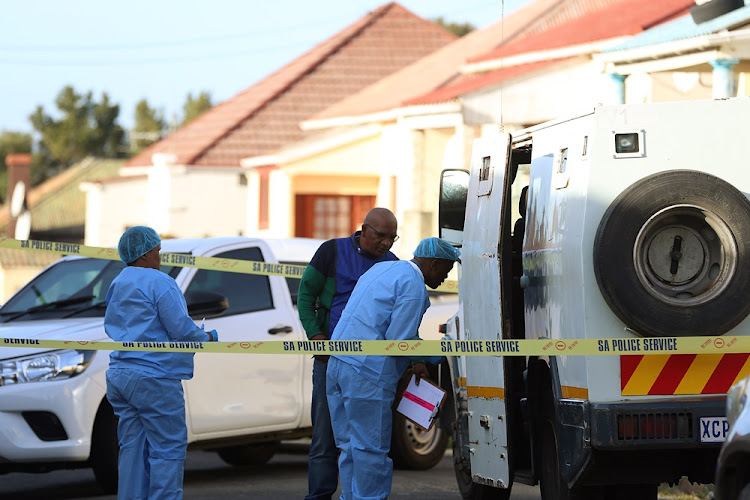 Police investigate the scene after a heist in East London.
Image: Mark Andrews

Security guards in the cash-in-transit sector earn about R2‚500 more per month than ordinary drivers in the same bargaining council.

The extra R2‚500 per month consists of a danger pay and a gun allowance‚ which were previously not included in the negotiated salary for the workers.

Workers in the CIT sector have threatened to go on strike following an increase in cash-in-transit heists.

The Federation of Unions of SA (Fedusa) has suggested that the salaries of CIT security officers‚ which average about R11‚000 per month‚ should be increased to R20‚000 per month because of the high risks associated with the job.

Security guards are 'soft and easy targets' because of profit-hungry bosses: Fedusa

But the Motor Transport Workers’ Union (MTWU) said unions had asked employers to include danger and gun allowances in workers’ basic salaries during the 2016 negotiations at the National Bargaining Council for the Road Freight and Logistics Industry.

“The CIT employees earn about R2‚500 more than (truck) drivers who are in the bargaining council‚” MTWU spokesman Hlasinyane Motaung said.

Cash-in-transit security officers said on Thursday they would embark on nationwide protests on June 11 to demand that concrete measures be taken to deal with the increasing heists. Fedusa announced it would join the protest action against government.

Cash-in-transit security officers will embark on nationwide protests on June 11 to demand that concrete measures be taken to deal with the increasing ...
News
4 years ago

George said the heist pandemic was totally understated. There were 180 such attacks in 2014 but that figure had increased to 370 in 2017.

“The main reason for the extreme increase could be attributed to the fact that cash-in-transit vehicles are seen as ‘soft and easy targets’ due to under-investment in strong security measures and that the security companies focus on maximising profits‚” George said.

Fedusa welcomed the call by the Motor Transport Workers Union for an urgent meeting with the management of major transit companies next week. MTWU is the majority trade union in the industry.

Fedusa and MTWU leadership had identified several weaknesses in the safety and security of the industry. These included weak and outdated vehicle designs‚ a low number of officers in the cash vehicles‚ weak firepower and outdated equipment of security officers‚ lack of training‚ low staff morale and the lack of focus on general safety precautions.

Five suspects arrested in connection with the cash-in-transit heist that happened on Thursday May 17 2018 appeared in the Boksburg Magistrate’s Court on Monday May 21 2018 Subscribe to TimesLIVE here: https://www.youtube.com/user/TimesLive

A security guard escaped with his life - suffering only minor injuries - after a failed cash-in-transit heist on the N3 near the Marlboro Drive ...
News
4 years ago