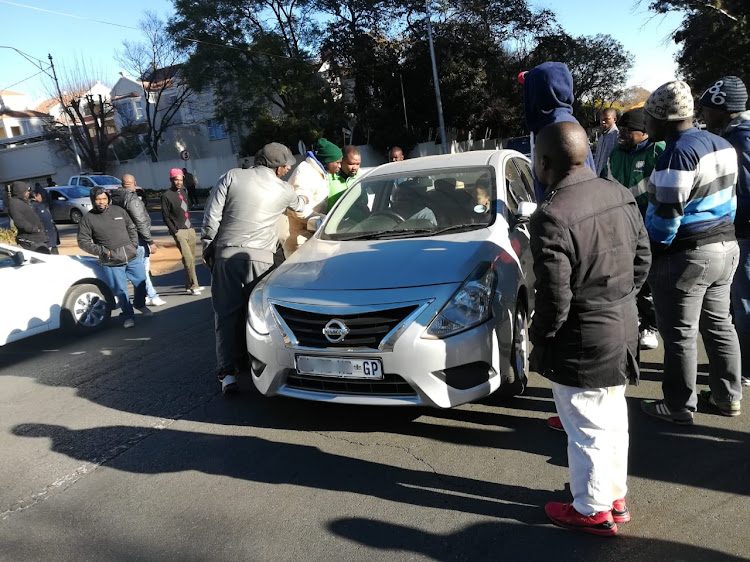 Uber and Taxify operators stop some of their fellow drivers near Zoo Lake in Johannesburg as they embark on a strike on July 3 2018.
Image: Ernest Mabuza

Uber and Taxify operators on Tuesday vowed to shut down the app-based e-hailing operations in Johannesburg.

Drivers for the app-based taxi service were early this morning blocking pick-ups of passengers in Rosebank‚ Johannesburg‚ who were wanting rides from their colleagues who have not joined the protest.

At an assembly point in Zoo Lake‚ the taxi operators stopped some Uber and Taxify operators who used Lower Park Drive from continuing with their journeys‚ while they were transporting customers.

In three instances witnessed by TimesLIVE‚ the strikers took the phones of the taxi drivers‚ although they allowed the drivers to continue their journeys prior to returning to the assembly point.

This happened before 9am. Police then arrived to maintain order.

Driver-partners almost resort to violence after one of the drivers refuses to join the #Uber and #Taxify protest. @RK_Gazette pic.twitter.com/dxGBmHQxwW

Organisers also sent groups of drivers to popular pick-up spots‚ including Gautrain's Park Station and Sandton‚ to collect drivers who had defied a call to strike‚ ordering them to join the protest gathering near Zoo Lake.

Although there were about 200 cars at the assembly point in Zoo Lake‚ the strikers wanted to go to other popular pick-up spots to ensure that no Uber and Taxify drivers were working.

Vhatuka Mbelengwa‚ a spokesman for the general task team comprising operators from both platforms‚ said the operators wanted an increase in the fee they were receiving from both companies.

"For Uber‚ we want them to reduce the 25 percent they are taking.

"We also want them to stop getting more operators on the platforms as these are oversubscribed‚" Mbelengwa said.

Mbelengwa said they would ask both companies to also stop training new drivers.

"We want those who are currently working on the platforms to start making a decent living‚" Mbelengwa said.

He said the task team wanted drivers from both platforms to be offline on Tuesday as they planned to submit memorandums to Uber in Kramervile and Taxify in Bryanston.

There were over 200 vehicles at Zoo Lake.

Uber South Africa said it will have zero tolerance for drivers who turned violent during Tuesday's protest in Green Point‚ Cape Town.
News
3 years ago