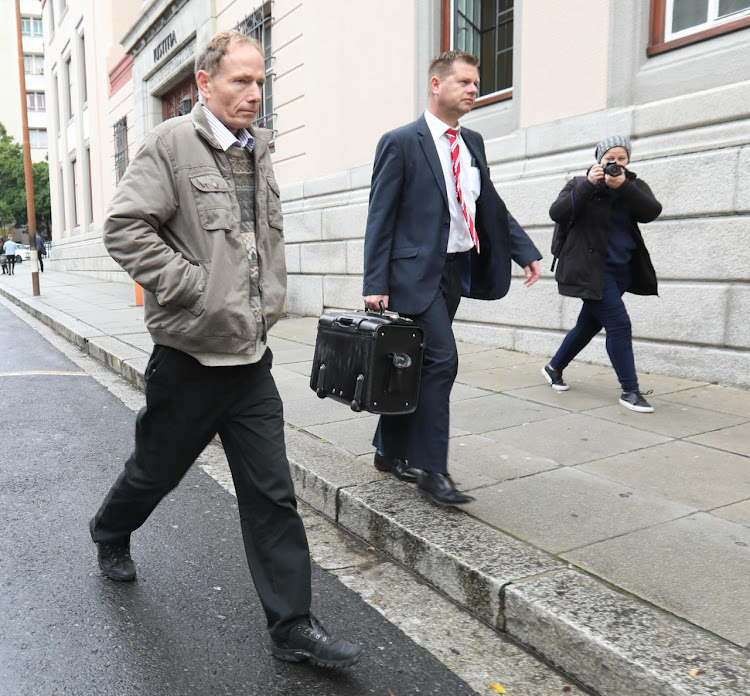 Professor Sean Davison leaves the Cape Town Magistrate's Court on September 19 2018 with his attorney‚ Joshua Greeff. He was freed on bail of R20‚000 after being charged with murdering a doctor friend in 2013.
Image: Esa Alexander

The founder of right-to-die organisation Dignity South Africa‚ Sean Davison‚ is out on bail after being charged with murder on Wednesday in the Cape Town Magistrate’s Court.

Davison‚ 57‚ was charged over a 2013 incident in which he allegedly assisted his doctor friend‚ Anrich Burger‚ to die. Burger became a quadriplegic after a car crash eight years earlier.

Appearing before magistrate Greg Jacobs‚ who granted him R20‚000 bail‚ Davison initially appeared uneasy‚ fidgeting with his hands and continually licking his lips.

In an affidavit read by his lawyer‚ Joshua Greeff‚ Davison — a professor in the biotechnology department at the University of the Western Cape — said he had no intention of evading trial and had handed his South African and New Zealand passports to the police.

He pledged his co-operation with the court and the police‚ and said he would plead not guilty.

“It has always been my contention that I have not committed any offence as alleged in this matter‚” said Davison.

“Neither my legal representative nor I have any insight into the police docket in this matter and I therefore reserve my right to challenge evidence at a later stage.”

Davison also told the court that if he was remanded in custody it would damage his reputation as an academic and a scientist. He said he was involved in various projects and his work was highly esteemed around the world.

One of the areas of expertise for which he was well-known was forensics‚ particularly involving crimes related to human rights. Being kept in custody would prejudice him in many ways.

“I’m extremely close to my wife and children and my greatest fear is of the impact that my incarceration would have on them‚” he said.

He worried that being kept in custody would put financial and emotional strain on his family. “Their knowledge of my arrest and detention would be extremely stressful‚ and my children would not be able to process the thought of my being in prison. My wife would also have to run our home without my emotional strength‚” he said.

“The university notes what has transpired and we will be making contact with the professor’s lawyers and family‚” she said.

Right-to-die activist Sean Davison has been arrested for murder in Cape Town.
News
2 years ago

Sean Davison, the professor who recently helped a South African doctor end his life, said on Saturday he would not be willing to assist in ...
Lifestyle
6 years ago

Madiba's illness has to get us talking about issues of death

NELSON Mandela may not be aware of it, but he has got us talking about death - something we have never had the courage to do before, though it ...
Lifestyle
7 years ago
Next Article