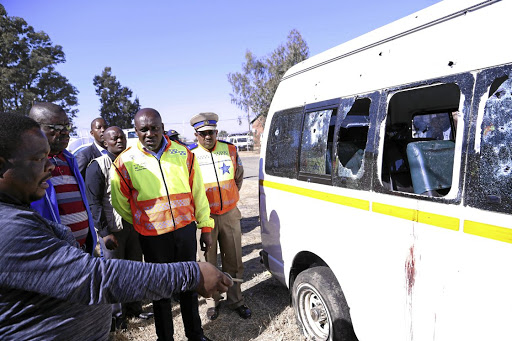 Transport and community safety MEC Mxolisi Kaunda is set to meet with all stakeholders in order to restore peace in KwaZulu-Natal
Image: SUPPLIED

Hlatshwayo was shot dead near Aller Park farm while driving home on Sunday. A provincial police task team has been assigned to investigate his murder — one in a series of bloody deaths between the feuding Klipriver Taxi Association and Sizwe Taxi Association.

Last year Kaunda suspended operations by both organisations following a series of killings of taxi operators and passengers. Since 2014 more than 61 taxi operators have been killed in the area.

The suspension was further extended by six months in June.

However last week‚ the Klipriver Taxi Association turned to the Pietermaritzburg High court to lift the ban. The order - in association with three religious organisations - was to be lifted in October pending a formal review. However‚ Bishop Andile Hlatshwayo‚ one of the pastors who supported the court application‚ said following their victory‚ the clergymen had to go to ground because of threats against them.

The Belville taxi rank has been closed after two commuters were caught in the crossfire of a taxi war in the area.
News
3 years ago

Kaunda relaxed the suspension after a huge outcry from commuters and allowed local operations to continue‚ with the suspension only affecting long distance operations. He further warned taxi operators that should there be any violent conflicts and deaths relating to taxi operations he would not hesitate to take decisive action and apply all legal avenues at his disposal.

“We’re deeply disturbed by the latest incident. At this stage police are investigating the motive behind Hlatshwayo’s death and we urge any person with information that may lead to the arrest of the perpetrators to come forward and help the police with information‚” said Kaunda.

In November last year‚ Sizwe Taxi Association chairman Sibusiso Obed Nkomonde was killed during an ambush in Newcastle. At the time the Sizwe and Klipriver taxi associations were embroiled in a deadly conflict over the lucrative Ladysmith-Johannesburg route.

Nkomonde’s killing followed another shooting in Ladysmith which left 10 people dead‚ including Klipriver Taxi Association chairman Bhekuyise Masondo‚ who had previously survived a drive-by shooting when he was attacked in the Ladysmith provincial hospital parking lot.

The family of the taxi owner who was shot dead in a Mthatha police cell last week‚ allege that crooked police may have had a hand in the brutal ...
News
3 years ago

The 10 were shot while travelling along Matiwaneskop road in the KwaZulu-Natal midlands town.

In June the Klipriver Taxi Association was granted an interim interdict in the Pietermaritzburg High Court arising from a tense dispute between them and the Sizwe Taxi Association.

The former were also barred from demanding payments from their rivals in order to use certain taxi routes and from insisting that Klipriver members make use of passenger lists that bear the name of the Sizwe Taxi Association.