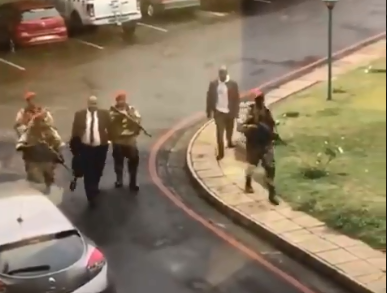 Video footage of Sipho Ngcobo‚ head of Qomkufa Security‚ and his security detail‚ has since gone viral.
Image: Via Twitter/@SiphamandlaGoge

A KwaZulu-Natal security boss recently arrived at an Endumeni municipality security tender briefing with a posse of gun-toting bodyguards in tow‚ to demonstrate the capabilities of his company‚ he claims.

Video footage of Sipho Ngcobo‚ head of the Dundee-based Qomkufa Security‚ and his four rifle-carrying security detail‚ clad in camouflage‚ has since gone viral.

When approached by TimesLIVE on Monday‚ Ngcobo declined to comment further on the footage.

He referenced an interview he did with eNCA at the weekend‚ saying what he had told the television station “is the truth and you can use that information”.

In the eNCA interview‚ Ngcobo said attending the municipal briefing with armed men was not meant to intimidate his competitors or municipal officials‚ but to demonstrate his company's services.

Ngcobo‚ in the interview‚ denied that his arrival was meant to intimidate municipal officials‚ when they were being protected by his company.

#TENDER KZN businessman Sipho Ngcobo of Qomkufa Security in Dundee, who went with heavily armed bodyguards to a security tender briefing at Endumeni Municipality tells @eNCA his life is in danger, for his crime fighting work in the area. pic.twitter.com/8xS49f400m

“I take that as someone trying to gain fame in the wrong way.

“We as the team from Qomkufa‚ were merely going to our client’s business site. When I go there I need to show the service we render‚ that Qomkufa is an existing business.

“Not that we are intimidating anyone.”

According to the report‚ Ngcobo already provides security to many of the embattled municipality’s top brass on a month-to-month basis.

The tender briefing he attended was for a long-term contract at the trouble-torn municipality.

Ngcobo claimed he had beefed up his security after he was intimidated because of his crime-fighting efforts in the town.

The ANC in KwaZulu-Natal has called for a tightening of the current tender system‚ which was identified by the Moerane Commission of Inquiry into ...
Politics
3 years ago

Earlier this year Endumeni mayor Sboniso Mbatha was arrested in connection with an alleged assassination plot against the municipal speaker‚ who suspected undue influence and possible corruption in a tender process.

He‚ a councillor and an alleged hitman were charged with conspiracy to commit murder.

Dr Isri Bedassi‚ a DA exco member‚ who served as acting mayor for a short while‚ said the matter was a private one.

“Ngcobo is known in the town and often seen with his security guards‚” he added.