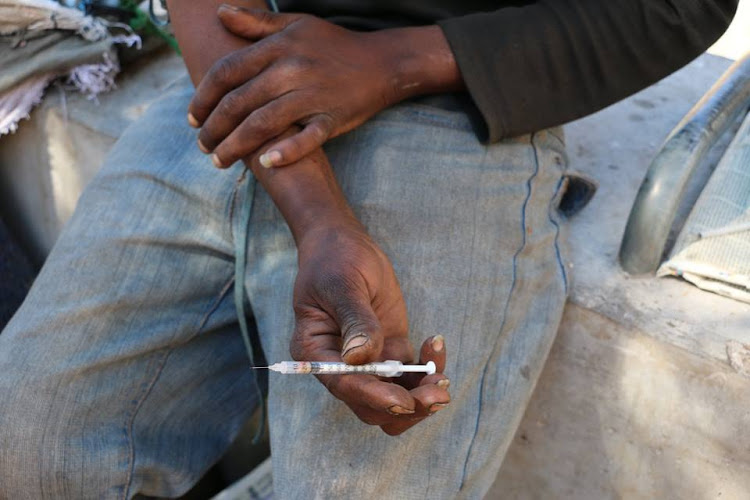 Hillbrow has a needle exchange programme for injecting drug users, however many residents are angry that drugs are openly used on the streets of the central Johannesburg suburb.
Image: Anova Health Institute’s Jab Smart outreach project

Business goes on for drug dealers in Hillbrow more than a week after vigilante residents chased them and their customers away; but it is far from business as usual.

The vigilantes forced dealers from one of the most lucrative drug turfs in the neighbourhood‚ but they continue to do business a block away.

However‚ a user told GroundUp that it was a ”completely different scene now. It’s really bad.”

About 100 people surprised dealers on the corners of Fife Road and O’Reilly Road on Saturday‚ 6 October‚ in protest against what they say is the blatant peddling and use of drugs. The violence escalated with protesters damaging property and attacking people. Police then intervened but were pelted with bottles and stones.

The protest went on until after dark with tyres burning in the road. The protesters included a group of people wearing yellow shirts with ANC insignias‚ toyi-toying while loud music blared from speakers.

Tension was still high late last week. Dealers were standing in small groups or alone and shooed buyers away as soon as they had purchased their drugs.

Hillbrow residents and police were involved in running street battles with each other on Saturday morning after people attacked flats believed to ...
News
3 years ago

A user said they used to be able to sit on the pavements of O’Reilly Street and smoke “Thai joints” (heroin mixed with dagga and tobacco) or rocks (crack cocaine) at leisure‚ 24 hours a day. And many homeless users lived on their dealer’s turf.

Several users agreed that the residents were upset because drugs were being used so openly‚ including the use of needles by injecting drug users. When asked about the residents’ complaints that police did nothing‚ one user just laughed and said the only reason the police came around was to collect payoffs.

“One of those people (protestors) is a woman from the block of flats there. She has a child who is hooked on Thai.”

According to the users the vigilantes first chased the dealers on the Saturday that the chaos started‚ but the next day they returned and targeted users. One said he had been hit several times with a sjambok.

GroundUp was aggressively told to leave the area and‚ more than once‚ warned by passersby to avoid going up O’Reilly road where “those people will beat you.”

According to residents‚ users and police sources‚ Nigerian syndicates have been entrenched in this part of Hillbrow for almost 20 years. They once occupied the Sands hotel before police operations‚ which targeted other hotels too‚ forced them out.

A suspected drug dealer was arrested on Monday night in Westbury‚ Johannesburg‚ after absconding bail in December last year.
News
3 years ago

O’Reilly Road had grown to resemble an “open air drug bazaar” trading 24 hours a day. Dealers have staked out small claims of turf within about a three-block radius.

Now‚ it is eerily quiet with a few pedestrians. Neither users nor dealers dare go too near it.

In stark contrast just two blocks away‚ Primrose Terrace has dozens of homeless users sleeping there and using drugs.

Drug policy activist Shaun Shelly said he was concerned about what’s happening in Hillbrow. “South Africa is at a tipping point. We could either move towards far more effective‚ progressive and rights-affirming policies or we could move towards a Phillipines-type situation where there is tacit and actual support for extra-judicial killing of people who use drugs.”