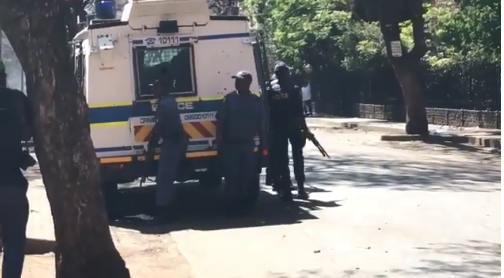 Members of the South African Police Services clash with residents who are attacking suspected drug dealers in Hillbrow, Johannesburg on October 6 2018
Image: Via Twitter/@GraemeHosken

Hillbrow residents and police were involved in running street battles with each other on Saturday morning after people attacked flats believed to belong to suspected drug dealers.

Blockading roads with burning tyres‚ residents pelted police with bottles and rocks when they tried to clear several roads. Several people are reported to have been injured when cops opened fire with rubber bullets.

Johannesburg metro police officers on the scene said they had heard the violence was linked to the Gauteng Shutdown campaign.

Petersen was shot when she was caught in the crossfire between rival gangs.

Obed Marubini of the Hillbrow Inner City community said they were protesting over drug dealers in the area.

“We are trying to push the drug dealers off the street. We report them to the police but they do nothing.

“The cops take bribes from these dealers. We are now protecting our community. We are taking the initiative to stop these dealers who are killing our kids.

“We are going street by street. We are going to the buildings and streets and chasing these drug dealers out.”

A 41-year-old woman was among the three people arrested for alleged drug dealing in Ennerdale in Johannesburg south‚ Gauteng police said on Friday.
News
3 years ago

“We are gatvol now. We don't want handouts‚ but jobs. It's going to get ugly if they don't react."
News
3 years ago

As residents of Westbury gathered at a memorial service on Wednesday to mourn the death of Heather Peterson‚ who died after she was caught in ...
News
3 years ago