‘We are only good for votes’ say Cato Crest families 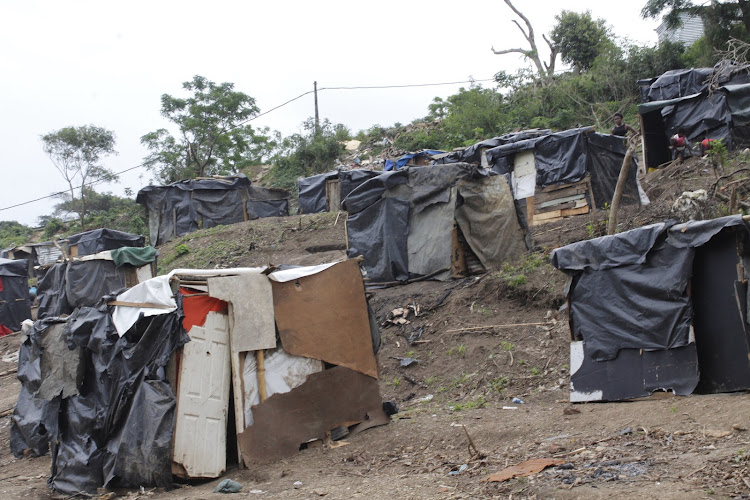 Residents of Ekhenana have been evicted several times.
Image: Groundup

Families who were evicted from Cato Crest in Durban have cleared space in a nearby forest to build themselves Ekhenana - a “Place of Hope”. Though they have been evicted several times they say they are prepared to “die” for their new homes.

The last eviction was on Tuesday and soon after the land invasion unit had left‚ the residents quickly put up their homes again.

They were evicted from Cato Crest‚ where they had been renting shacks‚ in order to make way for a new road. In August they set up home in the forest nearby. According to the Ethekwini municipality‚ the land belongs to the provincial department of human settlements.

The community lives from hand to mouth‚ gathering and sharing building material and food. A central area is a communal cooking area. One man who calls himself the chef prepares vegetable soup for lunch.

“They kick us out like dogs. They don’t even recognise us as humans. They even destroy the food we cook and throw sand everywhere. Without even engaging with us they demolish and burn our homes and leave. We are only good for votes‚ nothing more. We have no jobs and no land‚” says resident Wiseman Buthelezi.

Buthelezi‚ 32‚ says he will stay in Ekhenana because he has nowhere else to go.

Zinhle Dlamini‚ 27‚ from Richards Bay says they dubbed the place Ekhanana because they had hoped to find peace and belonging. She says it is a place where lost individuals united to form a community.

“Each day you live in fear but you have to be strong. I have three children to look after and I cannot go back home to be a burden to my family because they are also struggling. This place is close to schools‚ public roads and a clinics‚” says Dlamini.

She makes a living plaiting hair and is able to send some money back home. She says Ekhanana is a place where lost and displaced people united and formed a community.

“We are all here because we share one sad sentiment: we are homeless. We are decent people who may be looked down upon because we cannot afford rent or even material for our shacks. But we help each other out. Even the food that’s being cooked is a result of our unity as a community. We are not going anywhere‚ our end and beginning is right here‚” she says.

Zwelitsha shack-dwellers are building their own toilets and roads

Shack-dwellers in Zwelitsha informal settlement in Khayelitsha are doing their best to make their settlement liveable‚ digging pit toilets and making ...
News
3 years ago

Ward councillor Mkhipheni Ngiba denies any knowledge on the occupation in Cato Crest though residents say he came personally with the anti-land invasion unit and the police.

“The councillor came here two weeks ago and demanded that we leave immediately. He was accompanied by the land invasion unit and the police‚ he witnessed our shacks being burnt to the ground. He said we had no right to be here. Teargas and rubber bullets were shot without care for our children. All we ask is for an engagement with them. They should at least want to hear what we have to say‚” says Maphiwe Dladla‚ 26.