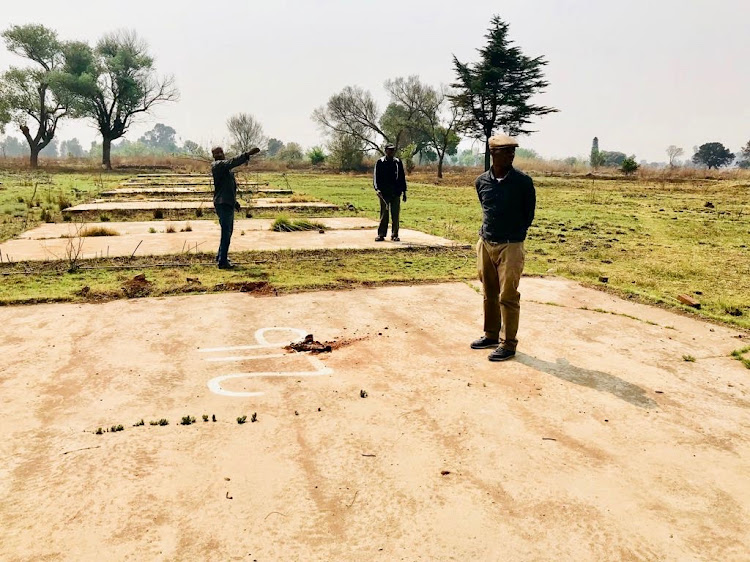 A group of residents who used to stay on a piece of land in Old Brakpan location before they were forcefully removed during apartheid have vowed to take back the land. But the land is currently the site of an illegal occupation‚ as well as municipal plans for a mega housing project.

“All we want is to come back to our old township. We will build it ourselves to be what it once was‚ before we were forcefully removed‚ our once pride and joy‚” says 55-year-old Mbusi Mhlope. He was taking Groundup on a tour of the Old Brakpan location together with some former residents.

Mhlope and others can still pinpoint and name every street as if the old township had not been razed to the ground.

He was born in the Old Brakpan location and forcefully removed together with his family when he was a teenager. They were relocated to Tskane‚ about 15km south.

“This is a historic piece of land and should be restored for generations and generations to come‚” says Mhlope.

Lolo Simelane and 77-year-old Tali Albert Ngomane were also among those relocated. They hope the old location can be rebuilt and given back to the descendants of the families who were removed in the late 1970s and early 1980s. They even showed GroundUp the foundations of their former houses.

President Cyril Ramaphosa has vowed that the government will return the land taken during apartheid to its rightful owners so that people can have ...
Politics
3 years ago

“It would be meaningless for the municipality to rebuild the township without us … We know where everything was‚” says Simelane. “Most of us were born inside our houses and our umbilical cords were buried here. That is just how much this place is important to us.”

The foundations of four-roomed houses still stand‚ although the structures were demolished. At the corner of each house are small round bucket like toilet structures.

“Those round structures used to have small buckets in them which we used as toilets. They would be emptied every single day … Today we remember them as the bucket system toilets. But they were normal toilets to us. We would whistle while we did our business on those toilets‚” says Simelane.

The foundations of Mamalong Nqabeni High and Mthonjeni Higher Primary School are also still visible. The men want a new school be built on the same spot‚ but “maybe bigger and better”.

“Clearly the township already has a plan. If only we can be given a chance to rebuild our location. The streets are still there. They only need to be cleared‚” says Simelane.

In 2015‚ the Ekhurhuleni Metropolitan Municipality announced a mega housing project on the Old Brakpan location. Land occupations followed‚ with both the EFF and ANC reported to be involved.   An informal settlement has now arisen on the south-eastern portion.

The municipality says it will evict all occupiers‚ but the eviction has been pending because of a temporary order by the High Court. Most‚ but not all‚ new occupiers however have been evicted by metro police.

“That land is under the Land Restitution Act and cannot just be allocated to people who are not the real beneficiaries‚” says Nelson Mogodi‚ who was born in Old Brakpan. He went into exile in Lesotho in the late 1970s and early 1980s. A former advocate‚ he assisted Tsakane residents to make land claims between 2006 and 2008.

According to Mogodi‚ a few people were compensated‚ but “some of us opted to be given back the land which to date has not materialised”.

Mogodi says he is therefore surprised by the plans for the mega housing project.

“Government promised to give land back to the people. It’s only fair that we and our children are included as beneficiaries for the current municipal housing project on that land.

But the Land Claims Commission says only a few of the former residents actually qualify to be given land and it would be alternative land‚ not land on the old site.

Kenya's Sengwer people will have hi-tech help fighting forced evictions in their forested homeland: an app that will share a $1m prize announced on ...
News
3 years ago

“The Office of the Regional Land Claims Commissioner: Gauteng Province received about 740 individually lodged land claims for the Brakpan Old Location and some of the land claimants opted for allocation of land for their restitution redress [as opposed to compensation].

“During the negotiations with Ekurhuleni Metropolitan Municipality‚ it was found that the identified land is not feasible to restore‚ which meant that [the commission] together with the land claimants would need to identify alternative land for restitution.”

“We no longer care about compensation … Let them give us back our old location‚” insists Sphiwe Magudulela. He was a teacher at Mthonjeni Higher Primary School at the time of the forced removals.

“Who do those people occupying the land now say they are? Because as we speak‚ they are living on the stands of old residents‚” says Magudulela.

“Our ancestors will never be at peace until we return to our roots. Things of the spirit are not understood by anyone. Do they not understand how complicated this is? … The spirits still live on that land.”

Former residents of Old Brakpan location have held meetings and they have resolved to take the land back‚ whether the government or municipality likes it or not.

Tali Albert Ngomane‚ who is 77 and leader of the Old Brakpan location residents committee‚ says 2‚000 families have signed forms indicating that they want to return to the Brakpan land. The forms have each person’s former address written on them.

“People want to go back to their old stands as they are and rebuild for themselves. The municipality does not have to worry about developing those sites‚” says  Ngomane. “The painful memories are still vivid in my mind today. Being forcefully removed from our land cost me my boxing career … The hope of going back to our land has kept me alive all these years.”

Land reform was critical for South Africa because of its “history of dispossession” - and it is the government’s responsibility to “bring all our ...
News
3 years ago

City of Ekhurhuleni spokeperson Themba Radebe said that at the inception of the mega housing project in 2015/16 “no people came forward to register any claim and therefore we are not aware of such”.

He said however‚ “The City of Ekurhuleni is not going to make any hasty decisions‚ however we will establish the authenticity and existence of the Committee of Old Brakpan Location dwellers.

"We will also verify with the Land Claims commission if such demands were registered to them‚ thus the Department can make an informed decision on the matter being raised.”

- This article was originally published by GroundUp