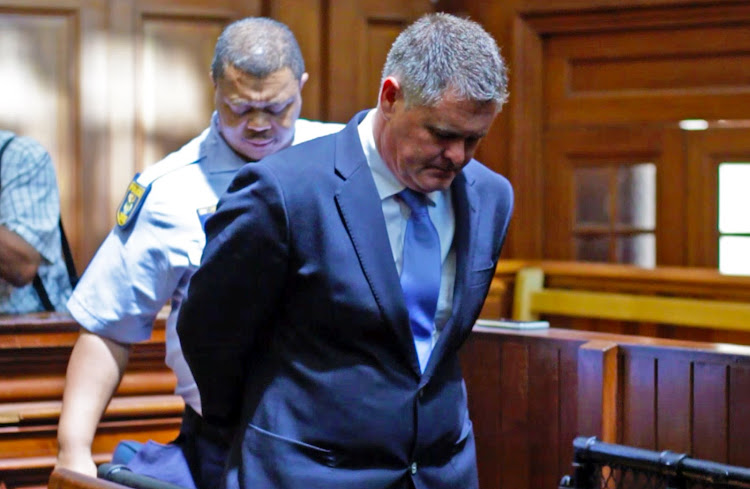 Jason Rohde was found guilty of murdering his wife Susan and attempting to make it look like a suicide on November 8 2018 in the Western Cape High Court.
Image: Anthony Molyneaux

Jason Rohde has been found guilty of murdering his wife Susan at the Spier Wine Estate in July 2016.

Judge Gayaat Salie-Hlophe read out a damning 38-page summary in the high court in Cape Town on Wednesday, saying that Susan had died from manual strangulation and obstruction of her airways such as smothering.

Of Rohde’s testimony, she said, “it was fraught with inconsistencies and he was economical with the truth.”

As she read through the damning list of forensic evidential facts, and witness statements for the state which she found “reliable and accurate”, Rohde sat with his head bowed, and his cheeks a deep scarlet colour.

She conceded that Rohde did not have a history of violence but detailed in fine-grain description how the love triangle between the couple and Rohde’s mistress reached a crescendo on that fateful weekend, when he tried to leave the hotel to be with his lover while Susan tried to stop him.

She said that “Susan’s ill-fated discovery” of an affair had been followed by “months of trauma.”

She concluded that Rohde murdered Susan in the bedroom and then dragged her across the carpet and simulated the suicide in the bathroom - then furnished it with a carefully planned alibis.

He had been “ducking and diving the truth” just as he had done with such aplomb in his extra-marital affair, she said.

The deceased was “relentless” in trying to keep her husband as her partner - especially that weekend. It is clear she knew the affair was still raging and sent a message which read “you are a devious fucking bastard.”

It was “still her priority to save the marriage,” said Judge Salie-Hlophe.

When his guilty verdict was read out, he stood dead still, just blinking and showing no expression.

Bail is withdrawn and Rohde has been remanded in custody.​