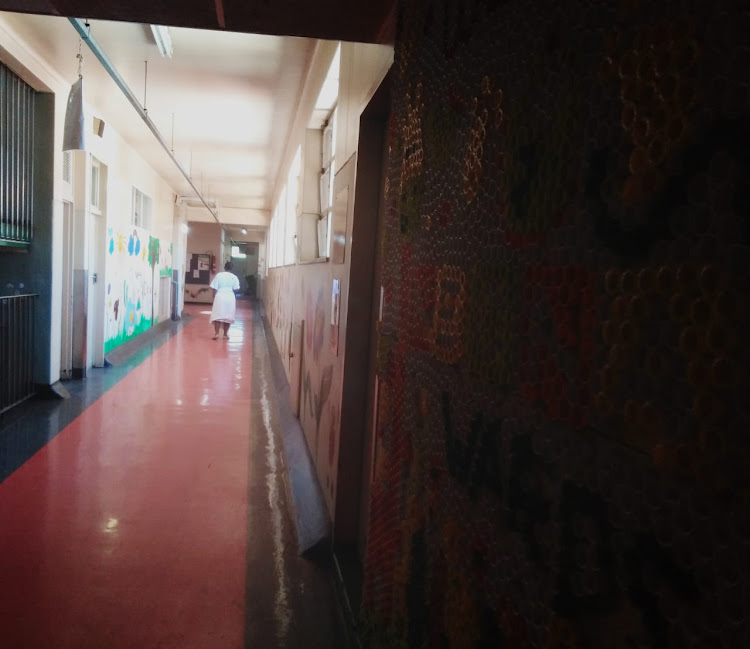 A new mother walks down a corridor at the Rahima Moosa Mother and Child Hospital in Coronationville, Johannesburg, on November 8, 2018. Nine babies died at the facility earlier this year.
Image: Image: Naledi Shange

Management of the Rahima Moosa Mother and Child Hospital in Coronationville, Johannesburg, has conceded that it violated patients’ rights to quality healthcare after nine babies died there earlier this year.

South African Human Rights Commission regional manager Buang Jones, speaking at the hospital after an inspection of the neonatal wards, said on Thursday the facility had admitted fault during a presentation behind closed doors earlier in the day.

The nine children who died were reported to have had necrotising enterocolitis - a condition which occurs mostly in premature newborns and affects their intestines.

A Limpopo health care centre is so ill-equipped that nurses at times have to use their cellphones for lighting because of a malfunctioning generator, ...
News
3 years ago

Jones said that according to hospital authorities the National Institute of Communicable Diseases had yet to establish the origin of the outbreak.

“The report is that they cannot find the actual cause of the death of the babies,” Jones said.

While the deaths were initially reported to have happened between April and July 2018, hospital management maintained that the deaths had occurred over one year.

No other fatalities had been reported since then, although one of the babies remained hospitalised.

Jones said hospital management had complained of challenges at the facility, including staff shortages, a lack of equipment, space and beds.

Management also complained of a high absenteeism rate as staff were demotivated and overworked due to the ratio of patients per nurse.

Rahima Moosa was originally built decades ago to serve people nearby but has seen an influx of patients from all over Johannesburg.

It does not have an intensive care unit for patients, a laboratory service or 24-hour blood bank on site.

The Mpumalanga health department has given Shongwe Hospital until Friday to release a report into how two infants died, amid suspicions that the ...
News
3 years ago

Approximately 13,000 babies are delivered at the hospital a year, translating into nearly 1,100 babies a month.

Jones said since the outbreak, the hospital had reinforced its hygiene management process and informed staff to take extra precautions.

But he criticised Gauteng health MEC Gwen Ramokgopa and head of department Mkhululi Lukhele for what he claimed was a lack of communication regarding their plan of action to improve the situation at public health facilities in Gauteng.

He said it was disappointing that nothing was being said by the HoD about the deaths at Thelle Mogoerane Hospital. “The department is not forthcoming,” Jones said, adding that the SAHRC had requested a turnaround strategy from the department but that, to date, had not received any further information.

An outbreak of Klebsiella killed six infants at that hospital.

TimesLIVE reached out to the Gauteng department of health for comment and is awaiting their response.

"When we are talking about the quality of healthcare that is being delivered there are those instances where lives are lost unnecessarily because of the pressure that is on the systems.

Gauteng’s health department has paid just over R1-billion in medical negligence claims in the past two-and-a-half years‚ mostly for babies born with ...
News
5 years ago

"Equipment is also not being serviced at a number of facilities. Some of the hospitals are overcrowded, mainly because there is poor planning from government's side," Halama said.

He said the birth of any child was supposed to be a happy moment for a family.

Halama echoed Jones’s words when he said vacant posts were not being filled. "From the government side I don't know where is the brains behind the planning of maternity wards and making sure that these wards are well equipped.

"It is not rare in our days to find a nurse that is working there alone looking after 27 babies. It is sad that only when babies die then the country must be alarmed. The issue of shortages of nurses in particular is a ticking time bomb in the country. More lives will be lost unnecessarily," Delihlazo warned.

Delihlazo said nurses had been complaining for some time, saying "please employ more nurses so that we can be effective in our work".

"Those cries from people like ourselves as unions have fallen on deaf ears,” she added.