Stop your neo-liberalism - Cosatu fires a shot across government's bows 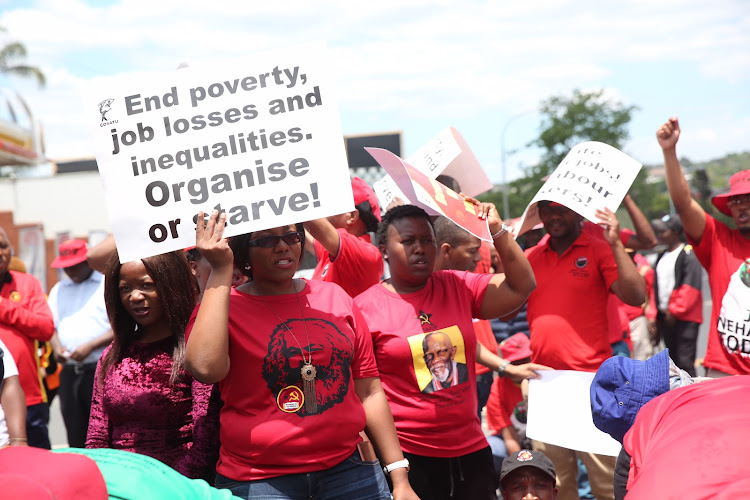 Cosatu demonstrators mass outside the office of the KZN premier on Thursday, November 22. This was the end point of a march aimed at combating the government's 'neo-liberal tendencies' that were 'causing job losses' among SOEs and in the mining sector.
Image: Jackie Clausen

A Congress of South African Trade Unions (Cosatu) march on the KwaZulu-Natal  premier’s office on Thursday should be considered as "a shot across the bows", the federation has warned, insisting that if the state doesn't stop its "neo-liberal tendencies", there will be more mass action.

In a memorandum delivered by hundreds of crimson-clad demonstrators, the union said that they would not rest until their demands were met.

Their chief gripe - of a long list - is the threat of retrenchments at Eskom, the SABC and in the mining sector.

Cosatu members march through Pietermaritzburg to the office of the Premier to protest against labour brokers , retrenchments, outsourcing and women and child abuse @TimesLIVE pic.twitter.com/Kfzta1yvXe

This they described as an "offensive neo-liberal tendency".

"We demand that the office of the premier to respond to demands of the federation within 10 days. Failure to comply shall force the federation to consider other available avenues. This march is a warning shot," the memorandum reads.

"Until our demands are met we shall not rest but rather intensify the mobilisation among workers, progressive forces and society as a whole.

"We are prepared to sleep with the hyena or hold a bull by its horns on these issues as they are worth fighting for."

In response to what it called a “neo-liberal offensive” targeting workers, the Congress of South African Trade Unions (Cosatu) will march on the ...
News
3 years ago