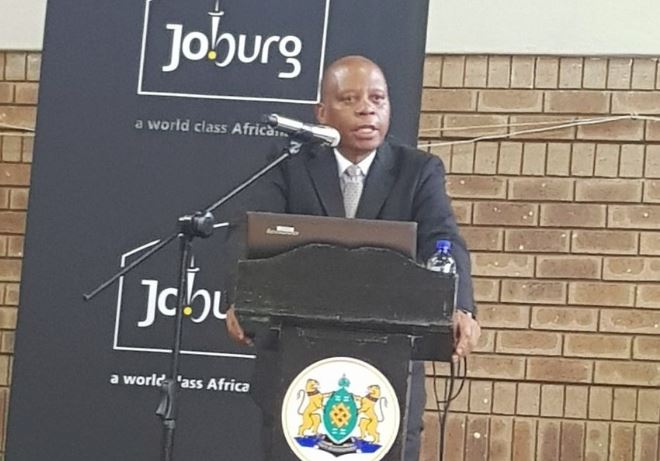 Johannesburg mayor Herman Mashaba says he wants to take back hijacked buildings and return them to citizens for quality low-cost housing. He urged citizens to use the city's telephone hotline to report crime.
Image: Herman Mashaba ‏via Twitter

Johannesburg mayor Herman Mashaba has confirmed the arrest of 32 "undocumented" people following a crime-prevention operation in Sandton on Monday.

"Two properties were targeted: 18 Gary Avenue, where 11 undocumented persons were arrested, and 122 Kelvin Drive, where 21 were arrested," said Mashaba on Tuesday.

The mayor said the arrests were part of an attempt to clean up the crime-ridden city.

"It is essential that we bring back the rule of law in our city and take it back from criminal elements such as landlords who take advantage of desperate people and house them under deplorable conditions.

"About 832 properties are confirmed to be hijacked in Johannesburg. Thirty-four properties that were previously in the hands of hijackers have been handed back to the rightful owners," he said.

The mayor said he wanted transform rundown buildings into quality low-cost housing so the city’s residents could have affordable rental spaces which also allow for small businesses.

"We are therefore committed to ensuring that we stop the rot in our inner city and make it a prosperous and inclusive place for our people to live, work and play," he said.

The arrests were led by the city’s group forensic and investigation services unit working alongside the police, Johannesburg's metro police, the department of home affairs and the local residents' association.

Mashaba has urged citizens to report fraud and corruption through the city’s 24-hour tip-off hotline 080-000-2587.

A day after doubling down on his citizen’s arrest, Johannesburg mayor Herman Mashaba has apologised for his social media post.
News
3 years ago