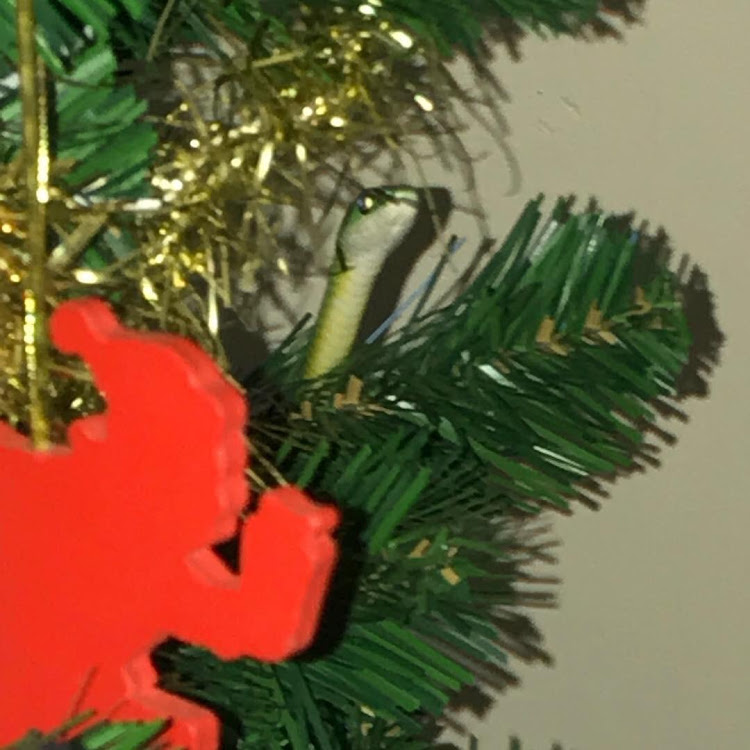 A Western Natal green snake takes refuge in a Christmas tree at an Ixopo home on Tuesday, December 18.
Image: Supplied

It wasn’t just presents under the Christmas tree for an Ixopo family on KwaZulu-Natal's south coast who happened upon a slithery squatter which had settled in among the branches.

Nicholas Campbell told TimesLIVE that his girlfriend had been decorating the tree when she inadvertently grabbed what turned out to be a Western Natal green snake.

"She saw the snake and assumed it was an ornament. She grabbed it and it tried to bite her. She screamed and while trying to run away she slipped and fell on her bum in the middle of the dining room," he said.

"We tried to corral the snake and it moved around the house and then again took refuge in the tree, and that is where it remains. Now that I know that its harmless I think we’ll just leave it. He seems happy and looks to be enjoying the decor," Campbell said.

"It is completely harmless and with the extreme heat and then rain, people will start finding them inside their houses," he said.

"When it’s really hot outside, they go into rooms in an effort to find some respite. If you do come across one, find a snake catcher and call them out," he added.

Workers were shocked when they arrived for their morning shift to find a 3m-long python taking a nap on the security fence.
News
3 years ago

Snake rescuers in Thailand had an epic hour-long tug-of-war with a python that had been living under a house for over a year - slowly killing off the ...
News
3 years ago