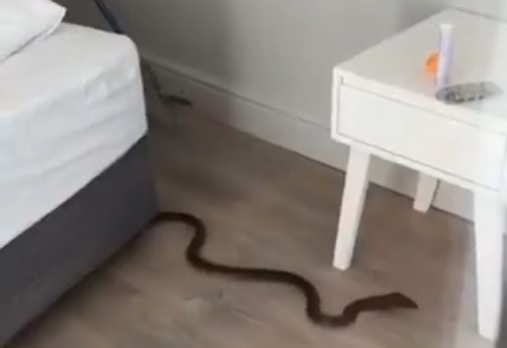 "This was inside my jacket!" on January 2 2019.
Image: Fillip Sklodowska’s Cat via Twitter

A woman had the fright of her life on Wednesday when she spotted a 2m-long cobra in her jacket in St Helena Bay, up the Cape West Coast.

"When you’re casually packing your bag, pick up your denim jacket and a massive ... Cape Cobra just flops out onto the floor," Fillip Sklodowska’s Cat tweeted.

"I’ve never screamed so much in my life."

She posted a video of the reptile being removed by snake experts Stefan Cronje and Shaun Kruger, of Langebaan Snake Rescue.

To concerned followers, she elaborated: "I’m from KZN and pretty mellow with snakes. But this guy was inside my jacket as I picked it up and fell by my feet 😂 and it’s a ... Cape Cobra. Second most venomous snake in SA. I was shaking."

She said she was fine, afterwards, commenting: "All good thanks. He got a fright when he fell out."

Cronje said the snake was under the bed and "very calm" when he and Kruger arrived at the AirBnB rental.

"That's usually a good sign," he said. "I simply poked the snake with my hook and when it came out it didn't show any signs of aggression."

From St Helena Bay, Cronje and Kruger went to Vredenburg to retrieve another Cape cobra. They took both snakes home to Langebaan and gave them water before releasing them back into the wild.

So far, said Cronje, this summer had not produced as many calls for help as last year, when snakes arrived at houses in record numbers looking for water.

"The Cape cobra is at the top of the list of the most common snakes we are called on to catch, but during the drought we had a lot of puff adders and boomslangs as well," he said.

His clients last year included a man who was sitting on the toilet when he looked down and saw a cobra in the bowl.

Most people would take a few steps backwards if they came across a four-and-a-half-metre-long cobra. This man, however, grabbed it by the tail.
News
3 years ago

A black mamba and a boomslang are just some of the often deadly reptiles removed from suburban KZN homes in the new season of this Nat Geo Wild ...
Lifestyle
3 years ago