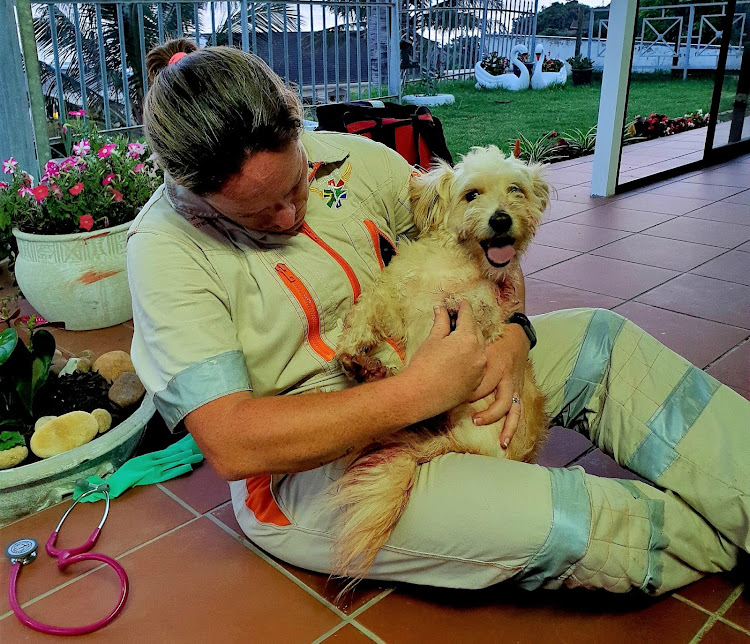 Paramedic Ceron Meadows attends to Lambo, a Maltese poodle who was attacked, along with its owner, by a pit bull in Durban.
Image: Rescue Care

A man who was out walking his Maltese poodle in Durban was attacked by a pit bull that had apparently escaped from its yard.

The incident took place at around 6pm on Thursday on Marine Drive on the Bluff, south of the city.

According to Rescue Care spokesman Garrith Jamieson, the man, in his 20s, sustained moderate injuries and was taken to hospital for treatment.

“Rescue Care paramedics arrived on the scene to find the man had sustained dog bites to his upper body. He was stabilised on the scene... before being transported to a nearby hospital,” said Jamieson.

He added that paramedics were asked to assist with the Maltese poodle, named Lambo, who was also attacked.

SAPS were on the scene and will be investigating further.

“Severely traumatised” is how a Port Elizabeth woman described her feelings after she was left with no choice but to shoot dead her neighbour's dogs.
News
2 years ago

A Phoenix, Durban, man, badly mauled by dogs as he walked through the neighbourhood of Northcroft nearly two weeks ago, died as a result of his ...
News
2 years ago

A police constable guarding Helen Zille's house is undergoing therapy after she was allegedly attacked by the Western Cape premier's rottweiller.
Politics
2 years ago

A woman who was attacked by a dog during a pre-Christmas swim at a City of Cape Town coastal resort is in line for a payout from the council.
News
2 years ago