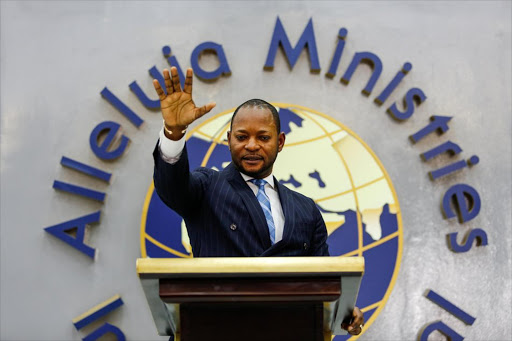 The Commission for the Promotion and Protection of the Rights, Cultural, Religious and Linguistic Communities (the CRL Rights Commission) says it has encountered numerous cases of church leaders who abuse their power and take advantage of their congregants.

From spraying congregants with insecticide to sexual assault, here are five church leaders who have managed to shock us with their controversial and criminal acts.

Pastor Alph Lukau of Alleluia Ministries has dominated headlines and social media this week after a video of him "raising a man from death" went viral.

Mzansi again showed that it has zero chill after a new social media "challenge" quickly went viral.
News
3 years ago

Lukau has made headlines before - for example, when he made his single female congregants fork out hundreds of rands for an "all-night prayer" to find a husband.

Lee Moerane has coughed up R5,000 for a prayer session she hopes will result in her meeting her Prince Charming. The author, businesswoman and ...
News
5 years ago

"Prophet" Bushiri, leader and founder of the Enlightened Christian Gathering Church, is loved by his congregants for performing "miracles" and giving them special oil to "anoint" themselves.

He is also well known for his extravagant lifestyle. He and his wife were arrested in early February on charges relating to fraud, money laundering and organised crime.

Congregants from provinces including Mpumalanga, Limpopo and the Eastern Cape have since come forward to say they have lost millions to the investment scheme Merger Chen Solutions which is linked to Bushiri. Hawks spokesperson Brig Hangwani Mulaudzi said the allegations are being looked into.

The leader of Jesus Dominion International has been making headlines for much of the past two years over charges of sexual assault and human trafficking.

He last appeared in court in January, when his trial was postponed to April 16.

The leader of End Times Disciples Ministries in Soshanguve, Pretoria, first made headlines four years ago when he fed his congregants snakes. This soon earned him the nickname "snake pastor".

More recently, a video of Mnguni feeding his congregants dog meat and blood - supposedly a cure for cancer - went viral.

Pastor Penuel Mnguni gave his congregants what he claims is dog meat and blood to 'cure' them,
News
3 years ago

Lethebo Rabalago of Mount Zion General Assembly in Limpopo sprayed the popular insecticide Doom on his congregants, claiming that it would "heal" them.

Lethabo was charged for contravening the Stock and Agricultural Remedies Act. He was fined R21,000, which his lawyer said he would pay in R3,000 instalments.

Doom prophet will pay a fine - in monthly installments