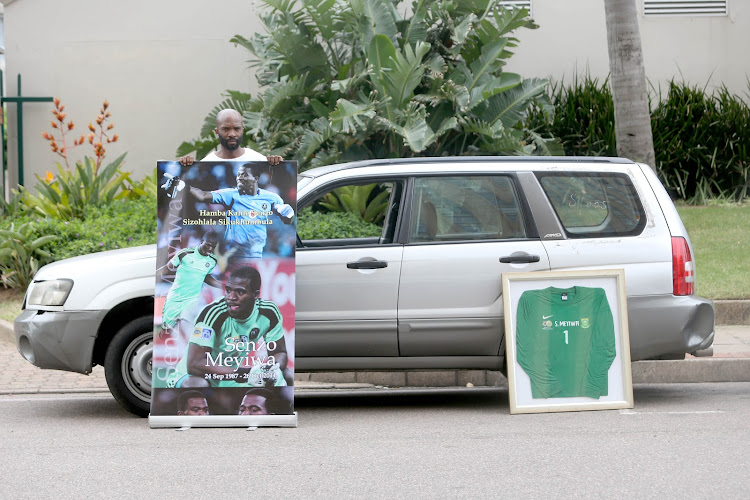 Senzo Meyiwa's cousin, Siyabonga Miya, has stood outside the Durban police headquarters since last Monday as a reminder of police minister Bheki Cele's promise to the family and the nation to catch his killers by Easter
Image: Thuli Dlamini

The clock is ticking for police minister Bheki Cele to deliver on the promise he made to the family of slain Bafana Bafana goalkeeper Senzo Meyiwa to catch his killers.

Cele announced publicly during a television interview in January that the mystery of Meyiwa's death would be solved before Easter.

"I'm putting my head on the block on this. I still maintain that the matter is going to be resolved in the not very distant future ... Definitely it will be before Christmas, even before Easter that matter will have to be resolved," said Cele in an interview on eNCA's Crimewatch.

Meyiwa was gunned down in Vosloorus, east of Johannesburg, at the house of his girlfriend Kelly Khumalo on the night of October 26 2014 in an alleged botched armed robbery.

He was killed in the presence of Khumalo, her mother, her sister Zandi, Zandi’s boyfriend Longwe Twala, his friends Mthokozisi Twala and Tumelo Madlala and Khumalo’s four-year-old son Christian. Except for the botched arrest of Zamokuhle Mbatha, who lives in Vosloorus near Khumalo’s home, police have not made any headway in the investigation, despite the fact that there were seven witnesses in the house.

The family are yet to hear from Cele.

Last month, the Meyiwa family told a TimesLIVE reporter that they were confident that the minister would be able to bring Senzo's killers to book.

"It means that because he has made the announcement there is something tangible," his brother, Sifiso, told TimesLIVE.

Siyabonga Miya, cousin of slain Bafana Bafana goalkeeper #SenzoMeyiwa, has been standing outside the Durban police headquarters all week and says he won’t move until he gets answers about Senzo’s case from police minister Bheki Cele @yasantha @TimesLIVE pic.twitter.com/ZTMYUP2KTt

In a bid to get Cele to live up to his promise, Siyabonga Miya, Meyiwa’s cousin, has since last Monday campaigned outside the SAPS headquarters in Durban.

Miya has stood outside with Meyiwa’s Bafana jersey and a sign that reads "Go well Senzo, we miss you."

"I am here because I am disappointed in the SAPS and the police leadership that so much time can go by without any developments. The family doesn't even know who is in charge of the case as we have never seen them. All we have is Cele making a promise on TV," said Miya.

Now Miya is saying they have lost hope because, since the promise, they have had no interaction with Cele.

"I tried calling him one time in January and he told me he was busy with election things … All I ask is that Bheki come with the team you picked to handle the case. There are things on social media about the case but we don’t know who to ask."

Sifso confirmed that the family had also tried unsuccessfully to speak to Cele.

Cele's spokesperson, Reneilwe Serero, said that the minister did not know of Miya's protest and that his office was shocked to hear of it. "The Meyiwa family have a direct line to the minister," she said.

She said police were on track to deliver on Cele's promise by Easter.

Twitter is sceptical of Bheki Cele's promise of a quick turnaround in Senzo Meyiwa's murder case.
News
2 years ago

Police minister Bheki Cele has vowed the police will solve the murder of former Bafana Bafana goalkeeper Senzo Meyiwa “before Christmas” this year.
News
2 years ago

Four years and still no justice for Senzo

Here's a look at everything that went down in a year that Mzansi thought they would crack the case of Senzo Meyiwa's murder.
TshisaLIVE
2 years ago
Next Article