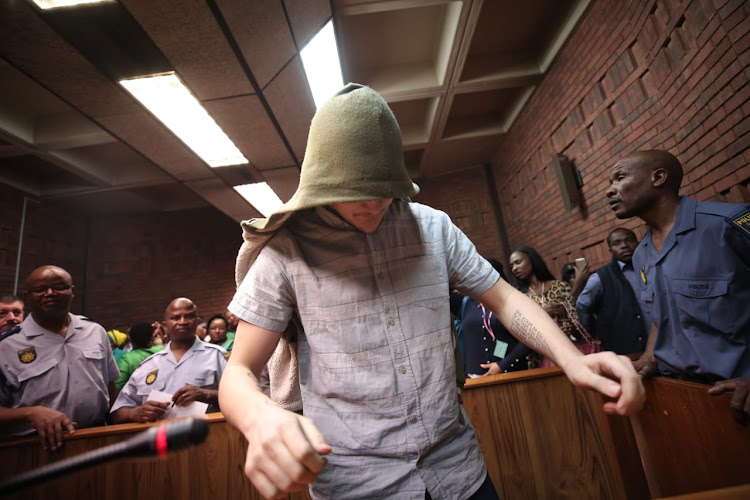 The man accused of raping a seven-year-old leaves the court room in the Pretoria magistrate's court on November 1 2018.
Image: Alaister Russell/The Sunday Times

The trial of the so-called Dros rapist will start on September 9 in the Pretoria high court and is expected to finish on September 20.

He is facing these five charges:

The man, who legally cannot be named until he has pleaded, briefly appeared in the Pretoria magistrate's court on Tuesday.

Members in the gallery reportedly shouted at the man, accused of raping a seven-year-old girl at a Dros restaurant in Silverton, Pretoria, asking him to show his face.

#Drosrape members of the gallery are shouting at the accused, calling him a rapist and telling him to show his face as he sits in the dock covering his face with his hands @TeamNews24

The man was declared fit to stand trial on February 8 by the Pretoria magistrate’s court.

He was admitted to Weskoppies Psychiatric Hospital in Pretoria, where he was evaluated by three psychologists and a psychiatrist.

He has been in custody since September 2018, when the incident allegedly happened.

Police in Pretoria have confirmed that the boyfriend of the Dros rape accused’s mother committed suicide on Wednesday.
News
3 years ago

The man accused of raping a seven-year-old girl in a Dros restaurant in Pretoria is fit to stand trial.
News
3 years ago

A report from the Weskoppies Psychiatric Hospital is on Friday expected to give clarity on whether the 20-year-old man who is alleged to have raped a ...
News
3 years ago