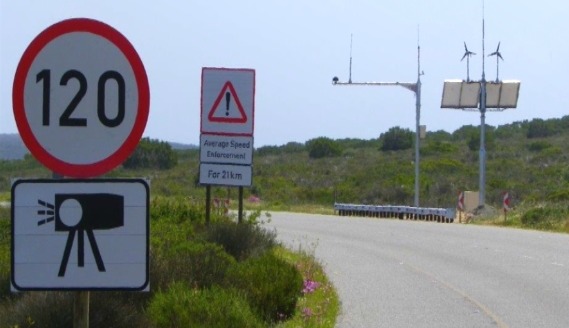 An average-speed-over-distance camera on the N2 near Cape Town.
Image: Arrive Alive

Cape Town has won the go-ahead from the directorate of public prosecutions (DPP) to fine the owners of unlicensed vehicles identified by average-speed-over-distance cameras.

The owners of unlicensed vehicles trapped by the cameras on highways such as the N2 and M5 will soon start receiving fines in the post, mayoral committee member JP Smith said on Wednesday.

Between July and December 2018, Cape Town issued more than 178,000 fines for unlicensed vehicles. This was 9% up on a year earlier, and the use of the automated cameras to identify offenders will boost the numbers further.

“Currently, officers using the mobile [automated cameras] are allowed to stop a vehicle and fine the driver if the camera shows that the vehicle is unlicensed,” said Smith.

Most drivers rate their performance behind the wheel as excellent or better - but road accidents tell a different story.
News
2 years ago

“Permission had to be sought from the DPP as there will be no interaction between the offender and an officer, and the prosecution will be technology-driven.”

Smith said offenders would be fined only once every 60 days, regardless of how many times the cameras identified the same unlicensed vehicle.

“The introduction of the remote enforcement of unlicensed vehicles will simply be another reminder to do the right thing,” he said.

Smith’s safety and security directorate has spent millions of rand on automated number-plate recognition technology since 2010. The technology is fitted in traffic officers’ vehicles and to scores of CCTV cameras around the city.

Licence-plate recognition cameras in the Diep River and Constantia areas have been at the centre of the Rob Packham murder trial in the Cape Town high court, in which the 57-year-old Constantia businessman has denied murdering his wife Gill in February 2018.

Previously, Smith has said the camera rollout in the past decade has made the City of Cape Town “the largest public surveillance agency on the continent”.

How much petrol money will you save by trading your car for a motorbike?

To find out Brenwin Naidu and Mat Durrans pitted a Suzuki Baleno 1.4 GLX hatchback against a Suzuki SV650 sport bike
Lifestyle
2 years ago

Distracted driving puts you more at risk of an accident

Your phone beeps and you reach for it, keeping one hand on the steering wheel.
News
3 years ago

Cape Town has just managed to scrape in on a ranking on the world's top 22 Tech Cities of 2017‚ becoming the only city in Africa to make the cut. ...
News
4 years ago