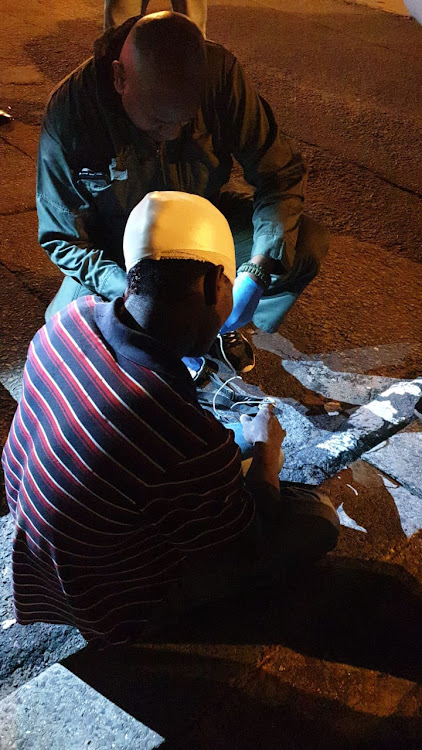 A paramedic working with the Mayville community policing forum assists a foreign national who sustained an injury during alleged xenophobic violence on Tuesday, March 26 2019, in Sydenham, Durban.
Image: Supplied

Minister of international relations and cooperation Lindiwe Sisulu has called an urgent meeting of African ambassadors to discuss the current spate of violence against foreign nationals and their properties in the Durban area.

This follows reports this week of foreign nationals being targeted in sporadic outbreaks of violence in the Sydenham and Overport areas of the city. In at least two cases, they were forced to seek refuge at local police stations.

In a statement on Saturday, Sisulu expressed serious concern about the situation and called on law-enforcement officers to deal with criminals and those damaging properties with the full might of the law.

She added that the African continent had contributed and sacrificed a lot for South Africans to be free and be liberated from the apartheid government.

“South African companies and our citizens are welcomed and loved across the continent: here at home, we should do the same, we must embrace our neighbours and fellow South Africans” Sisulu said.

On Friday, the eThekwini council and the Malawi High Commission denied the violence was xenophobic in nature, stating instead that it was “criminally motivated”.

"Both the municipality and the Malawian High Commission are in agreement that the incidents that led to Malawians nationals being chased out of their homes are not xenophobia but were criminally motivated as their belonging were stolen by the angry mob," the municipality said in a statement.

Sisulu said that in international forums like the United Nations, African Union (AU) and Southern African Development Community (SADC), the African continent and all countries in the world looked to South Africa for leadership.

“South Africa has been supported by all African countries and many countries in the world to have a non-permanent seat in the UNSC; it is currently the Vice Chairperson of the AU and the Chair of AU in 2020. These responsibilities require that we must welcome and lead in building bridges between nations, particularly in SADC and the continent.

Mzansi left shocked by Durban xenophobic attacks: 'We need to open our minds'

Scores of foreign nationals are seeking refuge at a Durban police stations after they were forced to move out of their homes.
News
3 years ago

“All of us must stand up and send a strong message that violence, all criminal activities and looting of properties of foreign nationals will not be tolerated, and the police and other law- enforcement agencies must act without fear or favour,” Sisulu said.

She added that the planned meeting, which would happen as soon as possible, would focus on how ambassadors and government could work with communities and all stakeholders to foster integration in communities.

The eThekwini municipality and the Malawi High Commission have jointly denied that recent violence aimed at foreign nationals in Durban was ...
News
3 years ago

The Department of Justice and Constitutional Development has condemned alleged attacks on foreigners in KwaZulu-Natal and Limpopo.
News
3 years ago

There were reports of an outbreak of xenophobic attacks in Springfield Park, Durban, late on Tuesday night.
News
3 years ago