IN PICTURES | Vrr Phaa! Quarter mile beast of a Golf hijacked and stripped bare in Joburg

The blue Golf 7R, fitted with an APR stage 3 performance upgrade kit and 20 inch racing rims, was well-known for tearing up the drag scene in the country.
Image: Ronza Tshikombedze

One of the country's quickest modified Volkswagen Golf 7Rs was found stripped bare hours after the owner was hijacked in Johannesburg.

The car was dubbed "MMK" after its owner's initials.

Ronza Tshikombedze, a friend and member of The Crazy Crew Cars - a group of motoring enthusiasts - confirmed that the car was hijacked on Monday.

Tshikombedze said the owner had knocked off from work and was on his way to see a friend in Kibler Park. He stopped at a local Spar to get a few drinks.

"As he walked to the entrance, four males pointed guns at him and instructed him to lie down. They took his car keys and phone and put him on the back seat and drove off," he said.

A fourth man got into a silver Audi A3.

Tshikombedze said they drove around with the owner for quite some time before demanding money and asking him about the vehicle tracker, which was faulty. 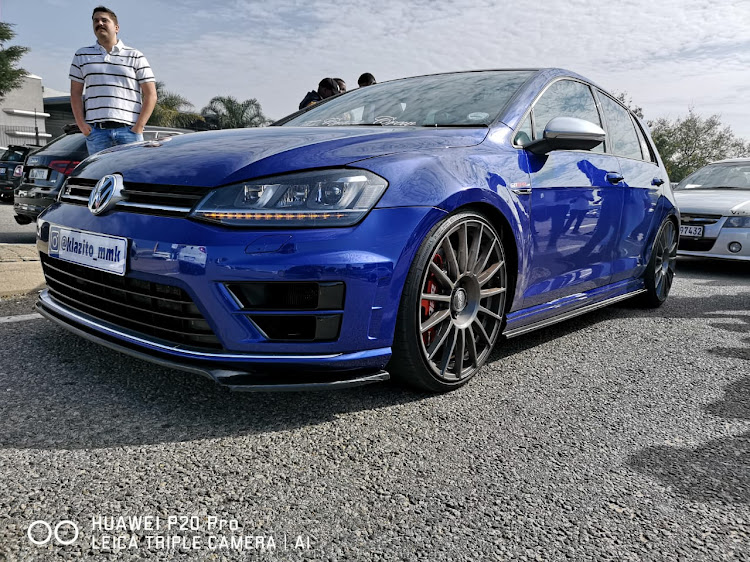 They withdrew R5,000 from one of his bank cards at an ATM and later made him transfer R3,000 to the one of the hijackers via eWallet.

Tshikombedze said the hijackers also swiped for a few beers and some food.

The vehicle's owner was then beaten up and dropped off in Lenasia around 7.25pm.

He opened a case at the Lenasia police station.

With the help of an IT specialist, they tracked down the car's location.

"We informed the police station, the flying squad and the dog unit and we rushed there."

He said when they arrived at the location, the house was locked. But the flying squad found the car one street away.

"When we arrived, we found the car on rocks, stripped to death. They took almost everything.

"Two guys were in the house but one escaped and the other one was arrested. We even found MMK's bank card in the house and a lot of evidence," he said.

The owner identified the car and broke down in tears.

"The guy is traumatised, he hardly slept the whole night."

Police could not immediately comment on the hijacking. This story will be updated when they do.

A Durban man has died following a shooting incident in the suburb of Reservoir Hills on Saturday.
News
1 year ago

Hijacked Toyota stripped while owner is locked in boot!

A case of attempted murder and hijacking has been opened after a Soweto man was found locked in his car boot - while it was being stripped by thieves.
News
2 years ago
Next Article

'You must take a life, or they take yours': CIT security officers recount their ...
'He's innocent' - Girlfriend of Brendin Horner murder suspect speaks
X