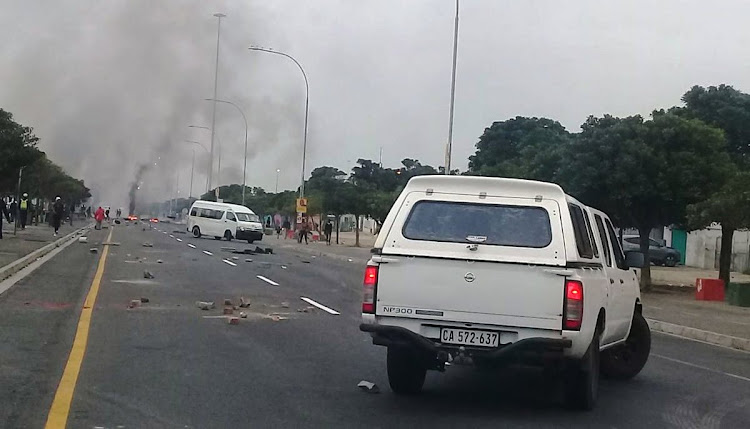 City of Cape Town traffic spokesperson Maxine Bezuidenhout said protesters had barricaded roads in and around Khayelitsha with burning tyres and rocks.

“The whole area is affected. Most access routes to and from Khayelitsha are closed or obstructed. There is no access to and from the area,” said Bezuidenhout.

By 8.15am, Baden Powell Drive and the Spine Road entrance to Khayelitsha had been reopened.

The protest was called by the Water Crisis & High Bills group chaired by Bishop Derrick Mtsolo of Litha Methodist Church in Ilitha Park. Demonstrators were asked to report to the church car park at 3am to take a stand against “exploitation by the City of Cape Town”.

A social media post said the objective was a total shutdown of Khayelitsha, home to around half a million people. “The planned action is a result of high water bills and poor services by the City of Cape Town, and it follows a number of unsuccessful efforts ... to engage the mayor of Cape Town and his management,” said the post.

The protesters accuse the city council's billing system of “ripping off” poor people. “We find ourselves unjustly indebted to the municipality,” said their post.

Western Cape health MEC Nomafrench Mbombo said on Facebook that the police had advised her to call off a visit to senior citizens in Khayelitsha, warning her that schools and clinics in the township would be closed on Thursday.

“I insisted that Khayelitsha people are smart, they will never allow such. But SAPS said, 'Not this time, the adults and holy people are shutting down services,'" said Mbombo.

“I still don’t believe it. Can Khayelitsha people confirm this? Would you rather sacrifice ... other services because of water bill tariffs?”

In February, protesters led by Mtsolo marched to the city council’s Khayelitsha administration office to demand that their water accounts be written off. They said they were “victims of inappropriate, estimated and actual high water bills” and had been “subjected to water disconnections” and deprived of basic human needs, reported GroundUp.

Mtsolo said officials had given him a written response to their demands, but added: “We want the city to send senior officials to a community meeting to explain what the document says in Xhosa.”

A statement from the office of mayor Dan Plato at the time said there may be various reasons for the high bills, adding that water was not disconnected from houses but rather restricted “when necessary” to 200 litres a day.

The mayor also said that debt for some households may not have been written off because of their refusal to allow water management devices to be installed.

About 500 protesters have barricaded a road with burning tyres at New City in Umzimkhulu, in southern KwaZulu-Natal.
News
3 years ago

Several protests have been reported across the country on Thursday morning.
News
3 years ago