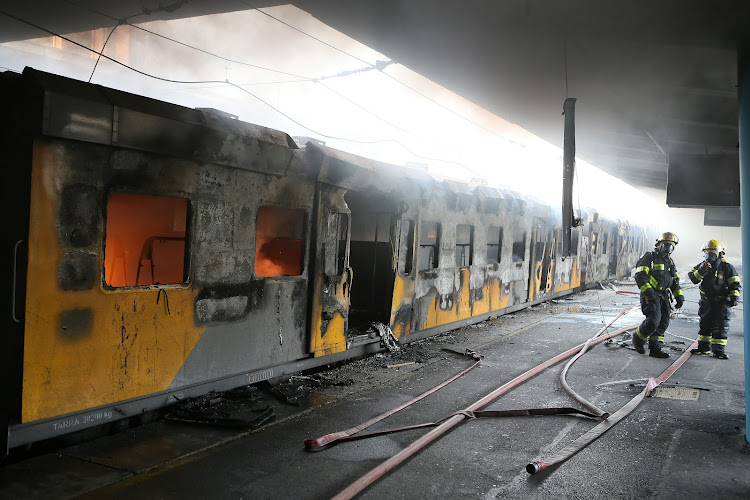 Trains have been targets of arson attacks in Cape Town since 2017. Two train sets worth about R33m were destroyed in a fire at Cape Town Station on Sunday.
Image: Ruvan Boshoff

Two train sets that were burnt to ashes at Cape Town station on Sunday were worth an estimated R33m, according to Metrorail.

Richard Walker, regional head of Metrorail, said that two platforms were also damaged during the blaze and warned that commuters would feel the knock-on effects.

"A [train] set was torched on platform 13 and high winds immediately fanned the fire and moved to an adjacent train set. The final count now is 12 coaches with an estimated value of damage to the train sets alone about R33m," he told CapeTalk radio on Monday.

"Then obviously there is the further damage to infrastructure and facilities at the station as well."

A bitter dispute between the Passenger Rail Agency of SA (Prasa) and two unions is believed to be behind most of the arson attacks that have ...
News
3 years ago

Western Cape Transport MEC Donald Grant told the radio station earlier that CCTV footage had captured images of two people at the scene of the blaze, who were initially apprehended by security but then escaped.

Cape Town mayor Dan Plato said in a statement on Monday that while the cause of of the fire had yet to be determined, "the reality is that more than 40 carriages have been burnt in arson attacks since 2017, crippling the backbone of public transport in the City of Cape Town, and yet not a single person has been charged as being responsible for any of the more than 10 incidents over the past two years".

News just in: Two trains were on fire at Platform 12 at the Cape Town railway station just before 4pm. Ten carriages were left gutted. The cause of the fire has not been confirmed and there are no injuries. pic.twitter.com/Xn0UkUrQxe

"Cape Town Central station has been the target of at least seven, and possibly eight, separate arson incidents since July 2018. Surely after the first incident you put the most stringent measures in place to ensure this doesn’t happen again? How is it that criminals can so brazenly burn our trains time and again and get away with it?" asked Plato.

"If we are to maintain law and order in this city there needs to consequences for criminal actions, and it is only national government’s South African Police Service (SAPS), through their detective services, and the National Prosecuting Authority (NPA) who can get results with these cases," he added.

Walker said that legislation needed to be amended to act as more of a deterrent for train arsonists as they could only currently be charged with malicious damage to property because trains were not regarded as a fixed structure.

The City of Cape Town's intention to take over passenger rail service will not give rail commuters improved, accessible, reliable and cost-effective ...
News
3 years ago

President Cyril Ramaphosa was one of the first people to travel in a new commuter train - the first of its kind to be built in South Africa - when he ...
News
3 years ago