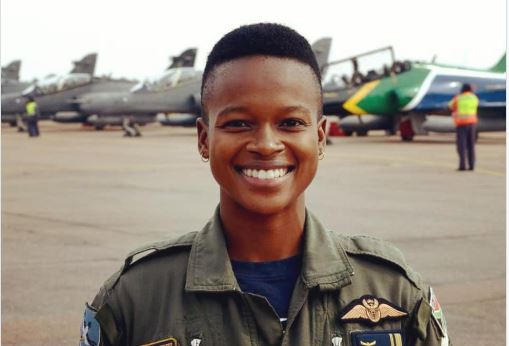 Here are four things you should know about her.

Her love for flying

In an interview on Afternoon Express, Mfeka said her first encounter with planes was at the age of five, when she went with her mother and grandmother to watch air shows at Durban's Virginia Airport. "She used to park her car outside of the fence and we watched the airplanes fly by, and I used to be so mesmerised."

How she pursued her dream

Mfeka said although she had dreamed of becoming a combat pilot, she never thought it was possible. Then she came across a recruitment advertisement by the South African Air Force (SAAF) at 16 years old, while she was reading about careers in maths and science.

"As I turned a page, I saw a recruitment article by the air force. My grades were really good at school and I met the entry requirements. I was thrilled." Shortly after high school, she joined the military.

According to Mfeka, her first woman combat pilot title did not come easy. She cited training as the most challenging part, which included ensuring that she was physically strong and able to endure long distances.

"When we did our basic military training it was tough, you get trained physically. We ate proteins mostly because you must endure long distances, you must be agile, strong, quick thinking."

The role of combat pilot

In her interview on Afternoon Express, she described a combat pilot as "the military specialist and police of the air".

"You're utilising your aircraft as your weapon. So you will either neutralise or you will engage the enemy in the air or on the ground. If anybody crosses our borders, the fighter pilots are the first to inspect the force. If it is a negative one, then we have to neutralise it, unfortunately."

In a show of strength in front of many of his continental peers, President Cyril Ramaphosa had a full battalion of the South African National Defence ...
News
3 years ago

Cyril's promise: 'There will be action'

President Cyril Ramaphosa promised South Africans a presidency of “action” as he delivered his inauguration speech in Pretoria on Saturday.
Politics
3 years ago

Presidential inauguration - Here's what you need to know

Loftus Versfeld is expected to fill up to capacity for Cyril Ramaphosa's inauguration.
Politics
3 years ago

Loftus stadium in Pretoria gears up for presidential inauguration

Scores of South Africans and International dignitaries are making their way into Loftus Stadium in Pretoria ahead of President Cyril Ramaphosa’s ...
Politics
3 years ago