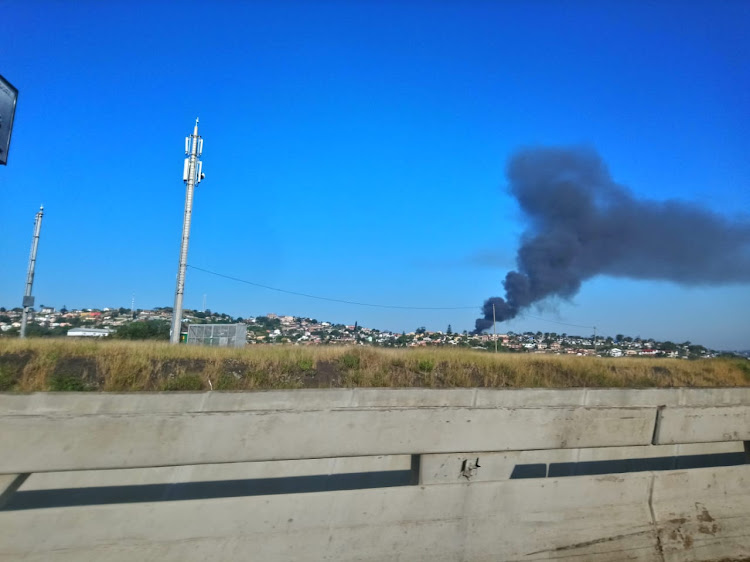 Plumes of thick black smoke could be seen for kilometers as 22 shacks went up in flames on Tuesday at an informal settlement in Effingham, Durban.
Image: Orrin Singh

Members of eThekwini Fire and Rescue worked tirelessly to put out a raging fire which destroyed 22 shacks at Sim Place informal settlement in Effingham on Tuesday.

When TimesLIVE arrived at the scene, members of the fire department were scrambling to get down an embankment to the fire which has unleashed plumes of black smoke into the Durban sky.

Divisional commander for eThekwini Fire and Rescue Bruce de Gier said no one was injured in the blaze.

"A lot of the people were away at work."

Members of #eThekwini Fire and Rescue are currently battling a fire which has broken out at an informal settlement on Sim Place in Kenville, Durban. @TimesLIVE @yasantha #ShackFire pic.twitter.com/cR82HZ0OK4

De Gier said they would be investigating the cause of the fire.

"We weren't able to get much information from the people at the scene but we will be investigating further to determine the cause," he said.

Dad’s fire pain: Why wasn’t even one kid saved?

When he heard that his four little children had burnt to death, Zamani Thwala had one question.
News
1 year ago

Police are investigating a case of child neglect after four children died in a fire at a home in Hillcrest, outside Durban, on Sunday night.
News
1 year ago

Several train carriages were burnt in a fire that started at a Transnet engineering yard in Maitland, Cape Town, on Sunday.
News
1 year ago
Next Article