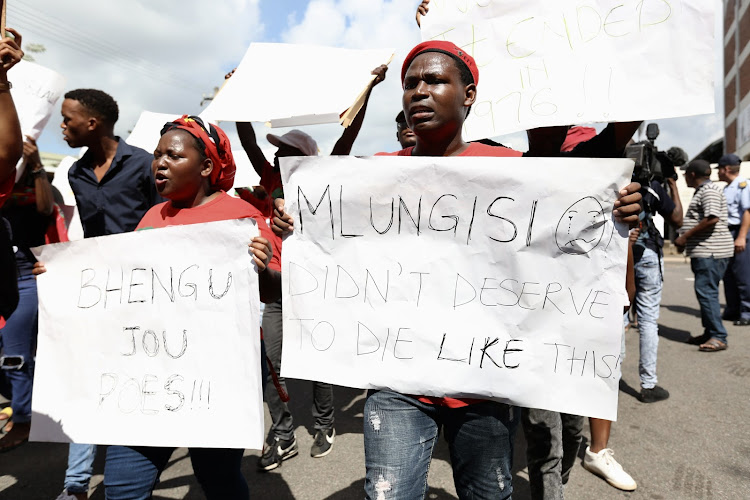 The EFF Students Command says it will continue to fight for justice for slain student Mlungisi Madonsela.
Image: JACKIE CLAUSEN

The National Prosecuting Authority (NPA) has declined to prosecute in the shooting incident of Durban University of Technology (DUT) student Mlungisi Madonsela.

Madonsela, a final-year public administration student, was shot outside the university's Steve Biko campus in February during clashes between students and private security guards. He died in hospital.

Police spokesperson Col Thembeka Mbele said that the docket was taken to the senior public prosecutor who did not want to prosecute.

The acting director of public prosecutions, advocate Elaine Zungu, said: "The matter was withdrawn against the accused as there was insufficient evidence. The matter has been referred for an inquest and the NPA will await that outcome."

Members of the EFF Students Command at DUT, to which Madonsela belonged, said they were not pleased by the decision and would be mobilising students.

"We are very disappointed and pained by this decision. Ours is to regroup and mobilise students and demand justice for Mlungisi because he died fighting for students to register. We will continue to fight and call for justice," said Students Command president Buntu Faku.

During his memorial service, Madonsela was hailed for championing student issues.

DUT said that they had been informed by the police about the matter and that nobody would be charged with Madonsela's death.

EFF MP Marshall Dlamini appeared briefly in the Cape Town Magistrate's Court on Wednesday in connection with the slapping of a police officer after ...
Politics
2 years ago