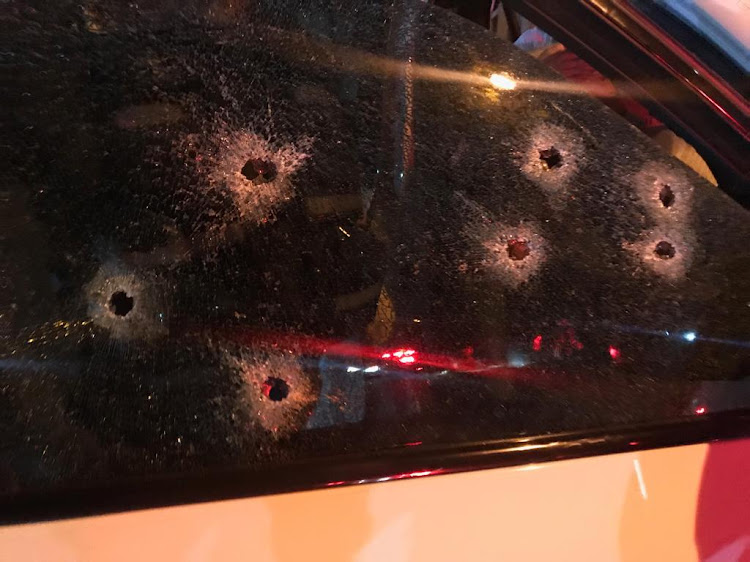 Police spokesperson Col Lungelo Dlamini said two men on a motorcycle shot Batchelor, “before he could drive into his premises at Olivedale after 6pm”.

Dlamini confirmed that Batchelor was the victim in the shooting, and that the retired footballer's family had been informed.

“He was shot through the window several times and died at the scene. The motive for the attack is unknown at this stage as nothing was taken. No suspects have been identified.”

When TimesLIVE phoned a number belonging to Batchelor's brother, Warren, a woman answered and said the family was still at the scene and "trying to deal with what has happened".

Pictures of the scene last night showed at least seven bullet holes in the car's window, and at least one other bullet hole in the driver's door panel.

Around three hours after the incident, police security was still tight at the scene on Market Road. Only marked vehicles were allowed to enter the area.

The end of the road was populated with journalists, onlookers and neighbours who were prevented from accessing their homes as it was an active crime scene.

About 70m from where reporters had gathered stood Batchelor's car. The white BMW X5 had its door open, and occasionally people peered in. In the front, slumped over, was Batchelor's body. Blood had trickled down his tattooed arm and dried near his wrist.

Former striker Marc Batchelor was the rarest of players who featured for all three prominent Soweto sides.
Sport
2 years ago

Two of Batchelor’s former teammates on Monday night reminisced about the time they spent with him during their playing days.

Pollen Ndlanya, who played with the towering forward, said Batchelor was a dedicated player who always wanted to help the club win silverware.

“He would always redouble his efforts at training and during matches. He made an invaluable contribution to football and would always give young players advice,” Ndlanya told TimesLIVE's sister publication, Sowetan.

“People misunderstood him for being arrogant because of his outspokenness. Yes, he was short-tempered but that didn't make him arrogant. He would also question the coach if he was not given game time. But again, he wasn’t arrogant.

"May his soul rest in eternal peace," said Ndlanya.

Steve Lekoelea, who played with Batchelor at Pirates, also acknowledged the striker's commitment as a player.

“He was a player who was always looking forward to the next training session. He wanted to win, and losing was not part of his vocabulary,” Lekoelea said.

“He wanted to perfect his game and he was a team player. I’m devastated by his passing away.”

'I loved to bully bullies': Lionel Hunter's journey from bouncer to boxing coach

When Lionel Hunter became a bouncer in the late 1980s, gangster Gary Beuthin had already embarked on his reign of terror at Johannesburg nightclubs.
Sport
2 years ago

"They are legal gangsters, that's what I can say about the police today."
News
2 years ago