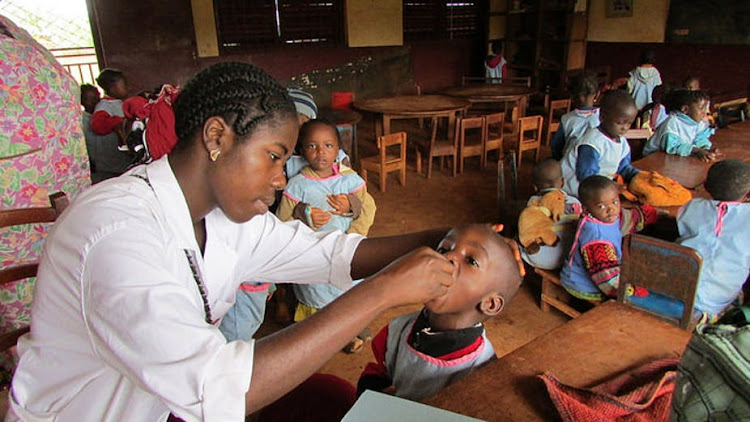 Since the last wild polio case was detected on August 21 2016 in Nigeria, the government has organised more than a dozen supplementary immunisation campaigns with oral polio vaccine, worked on strengthening routine immunisation and improved its polio surveillance networks to reach more children.
Image: Flickr/Center for Disease Control via The Conversation

Africa has passed a milestone threshold — three years with no case of wild poliovirus detected.

This three-year landmark sets in motion a comprehensive evaluation process by the Africa Regional Certification Commission to determine if the entire World Health Organisation (WHO) African Region of 47 countries indeed can be declared to have eradicated wild poliovirus.

Certification that the WHO African Region is free of wild polio is expected in early 2020.

“We are confident that soon we will be trumpeting the certification that countries have, once and for all, kicked polio out of Africa,” said Dr Matshidiso Moeti, WHO regional director for Africa.

If the evaluation process proves the wild virus is gone, Africa will join four of the WHO regions — the Americas, the Western Pacific, Europe and Southeast Asia — in holding this distinction. It will leave only the WHO Eastern Mediterranean region still working to stop the virus.

Growing numbers of parents are preventing their daughters being vaccinated against the cancer-causing human papillomavirus (HPV).
News
3 years ago

“The path to eradicating polio in Africa has been a monumental effort of multinational co-ordination on an unprecedented scale, providing vaccinations to hundreds of millions of children and conducting immunisation campaigns in some of the most remote locations in the world, with vigilance and exhaustive surveillance to timely detect outbreaks, including among people on the move,” she said. “It has involved men and women volunteering in the thousands, sometimes putting themselves in harm’s way, some even sacrificing their life for this work.”

She noted that “these successes would not have been possible without the incredible perseverance of countries and partners in the Global Polio Eradication Initiative, which have mobilised the financial and technical resources to get the job done.”

Despite the progress, a number of remaining challenges — including inaccessibility due to conflict and insecurity in some areas, variations in campaign quality, massive mobile populations and, in some instances, parental refusal — have prevented health workers from reaching all children everywhere with polio vaccines.

Suboptimal routine immunisation coverage remains a critical challenge in some countries, said WHO.

“As a result, outbreaks of circulating vaccine-derived poliovirus — a rare occurrence in communities with low levels of population immunity — are still possible in several countries across Africa.”

Moeti said: “We must remain vigilant in our immunisation and surveillance efforts. Every country must continue ensuring that it is closely looking for the virus and reaching every child with vaccines.”

Should I vaccinate my child for HPV?

There is an outbreak of highly infectious whooping cough in SA, despite it being a vaccine-preventable disease. A vaccine expert says poor vaccine ...
News
3 years ago