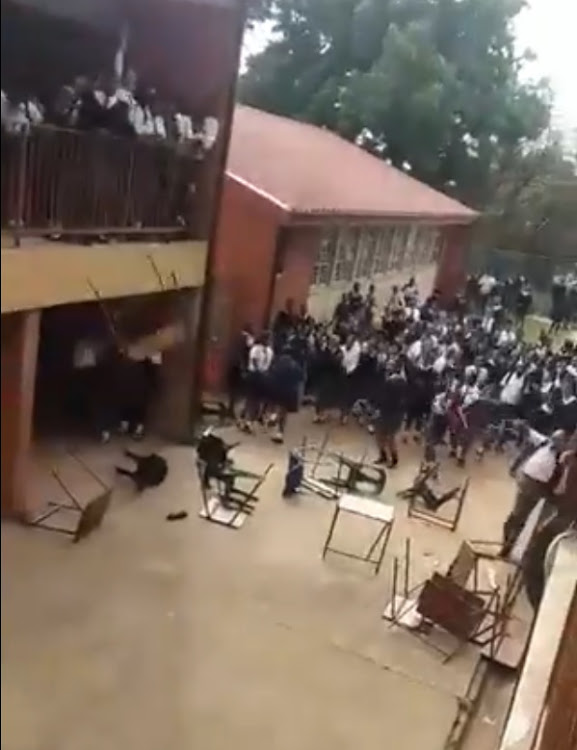 A screenshot from the video showing pupils from Isipingo Secondary School, south of Durban, throwing chairs and desks from the second floor.
Image: Screenshot

Pupils at Reunion Secondary School in Isipingo, south of Durban, tossed desks and chairs off the second floor of one of the school's buildings on Wednesday, angered by the fact that a deputy principal was to assume the position of principal.

While footage of the unrest at the school has gone viral on social media, it is understood that the crux of the concern relates to the principal, Mahalingam Padayachee, handing over the reins to a deputy principal.

Padayachee is set to retire at the end of October.

Despite the riot, the department of education has labelled it as a “positive problem”.

Provincial education department spokesperson Muzi Mahlambi told TimesLIVE on Thursday that while the department condemned actions undertaken by the pupils, they were happy that the students held their principal in such high esteem.

“For the first time we are dealing with a positive problem here, where learners are saying 'no you can't go, we still need you as our principal'.”

He agreed that the pupils were upset about the fact that one of the deputy principals would take over, but remained adamant that this was testament to the good work Padayachee had done over the years.

“The students say that over the years he had been a good manager and the school has been performing very well, so it was a matter of learners feeling uneasy in terms of what was going to happen come the following year - it was the fear of change.”

Mahlambi said the department criticised the manner in which the pupils demonstrated and rioted in order to get their message across.

“It's a positive message to us that if you are doing very well, people would not want to let go because of the good service you are providing to them, but they are children - they handled the matter in a bad manner.”

Mahlambi praised Padayachee's interventions to restore order after the unrest.

“That further indicates that he is a good principal. When this happened he was able to speak to the learners to calm the situation and release them early for the rest of the day.”

He said that calm was restored to the school on Thursday and pupils were currently writing exams.

“Going forward there is a meeting between the student body leadership and the school governing body so that they address the issue and be assured that the department will replace the principal with someone of his calibre,” he said.

Police spokesperson Capt Nqobile Gwala said a group of about 150 people blockaded the corner of the M35 and Old Main road with burning tyres. 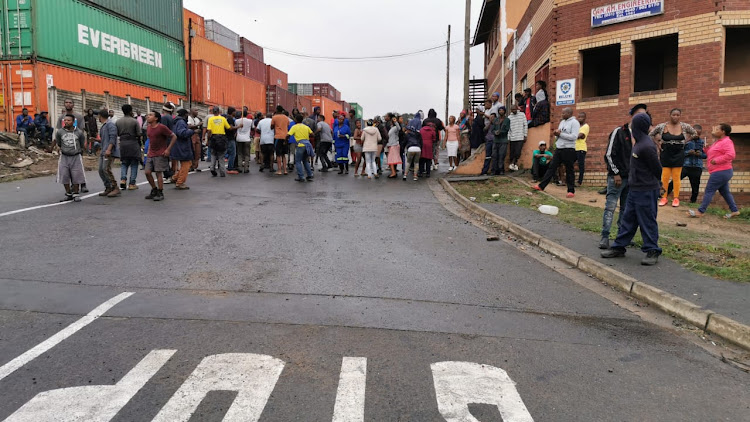 “The local police as well as Public Order Police are at the scene to monitor and stabilise the situation. No damages reported,” said Gwala.

It is understood that the protests are related to housing issues.

The KwaDlangezwa Satellite Police Station near the University of Zululand (Unizulu) was torched on Monday night.
News
2 years ago

A truck was torched and police are on high alert in Cape Town after a public meeting in Hangberg, Hout Bay, where a service delivery discussion ...
News
2 years ago