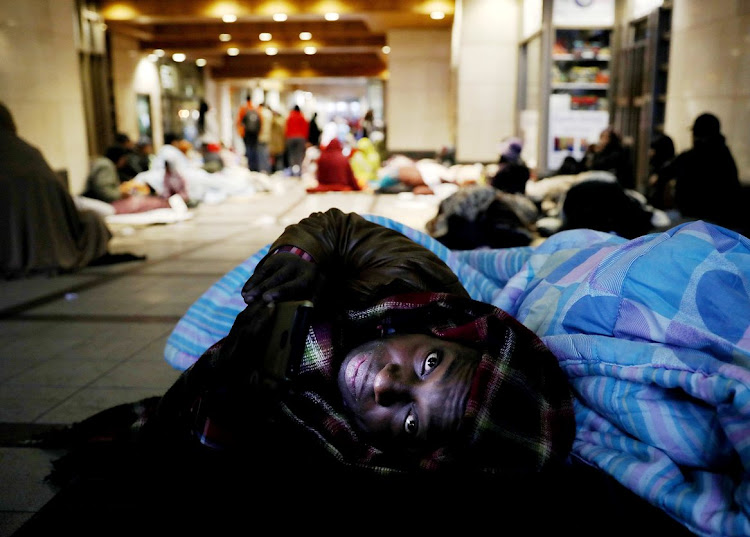 Papy Sukami, from the Democratic Republic of the Congo, is one of the refugees sleeping outside the offices of the UN High Commission for Refugees in Cape Town.
Image: Esa Alexander

Hundreds of refugees remained outside the offices of the United Nations High Commission for Refugees (UNHCR) in Cape Town on Wednesday, after spending two nights sleeping there.

They say they have been victims of xenophobia in SA and want the commission to help them settle elsewhere, vowing not to leave until the agency changes its treatment of them.

Carine Kavira, who said her brother was shot dead in a 2012 xenophobic attack, said she will not leave the UNHCR offices until she finds a solution to her problems.

“We want to leave this country, the government of SA must stop their lies, the thing of Ubuntu is a lie” says DRC Congo refugee Malachie Bosweli protesting outside the UNHCR offices in Cape Town @TimesLIVE pic.twitter.com/zaDX0Zviwn

“I am not leaving without an answer,” said Kavira, who is from the Democratic Republic of Congo. “I have seen horror in my country. I am not scared. 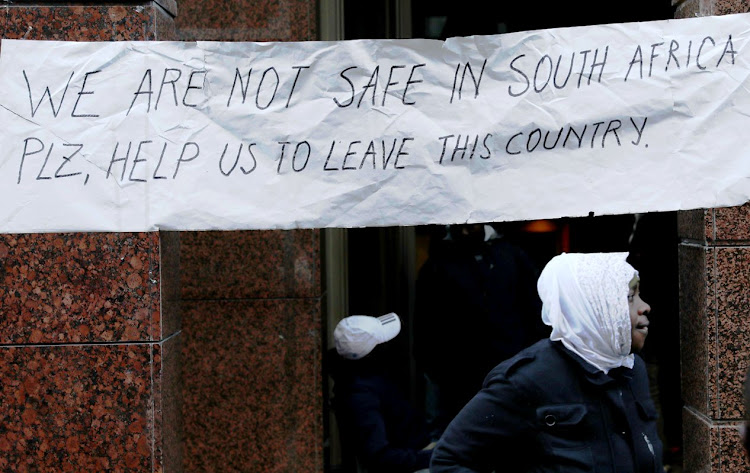 A banner hung by refugees at the Cape Town city centre building that houses the local office of the UN High Commissioner for Refugees.
Image: Esa Alexander

Kavira said she came to SA in 2003 after her parents were killed, but she is still using an asylum document. Despite a qualification from the SA Chefs Academy, she earns less than R4,000 a month.

Her 12-year-old daughter, Wendy Diatezua, said: “I have been missing school [this week] because I don’t want to be in a country where I am attacked, beaten up and reminded every minute that I do not belong here.

“I was slapped on the face and threatened with a knife by other schoolchildren while I waited for a train at Salt River. UNHCR should assist my family to leave.”

Congo refugee, Papy Sukami camping outside the UNHRC office in Cape Town says “we fear for our lives, we not coming as investors, we are just coming here for a roof to stay and a place to eat” @TimesLIVE pic.twitter.com/5Ryi9SZUbR

Patrick Mbangu said he had no documents, but his wife had refugee status. In 2008 he obtained refugee status under a single family file. But in 2014, home affairs took him and the couple’s four children out of the file, and said he and the children should leave.

He has a security company and said one of his employees was shot in Maitland on September 16 during xenophobic attacks. “I do not understand why a black brother would hate his black brother to such extent. We do not want to stay here any more ... UNHCR must take action.”

Cuma Aamani said he experienced a xenophobic attack at work. He was hospitalised for six months after colleagues from the security company for which he worked in Strand assaulted him with golf clubs.

“I don’t feel safe, I am prepared to camp here, even for months, till I get an answer,” he said.

One of the organisers of the protest, Jean-Pierre Balous from Western Cape Leadership for Refugees, Migrants and Women, said UNHCR employees were using a back door to enter and exit the office.

Foreigners camping outside the UN High Commission for Refugees office in Cape Town to convince officials that they fear for their lives and want to leave South Africa @TimesLIVE pic.twitter.com/wBrsWlW8aA

He said an employee who addressed the protesters explained that the UNHCR supported integration, not resettlement. “But how are they going to do it when communities don’t want refugees any more? Forcing them is what is escalating these xenophobic attacks.

“UNHCR outside has done a tremendous job, but in this country they are distancing themselves from the mandate of UNHCR. They treat refugees badly.

“Refugees are being threatened in the communities they live. If they do not leave SA they will be killed. Other countries have already repatriated their citizens, but a refugee does not have a home to go back to. We will sit at the UNHCR until we receive a proper answer.”

Markku Aikomus, spokesperson for UNHCR Southern Africa, said the organisation would issue a statement about the protest.

Statistics show that foreigners - both legal and illegal - account for just 7% of SA's population, with more than 400,000 deported between 2010 and ...
News
2 years ago

The small boy reached into the pocket of his baby-blue pyjama top and pulled out his gun.
News
2 years ago