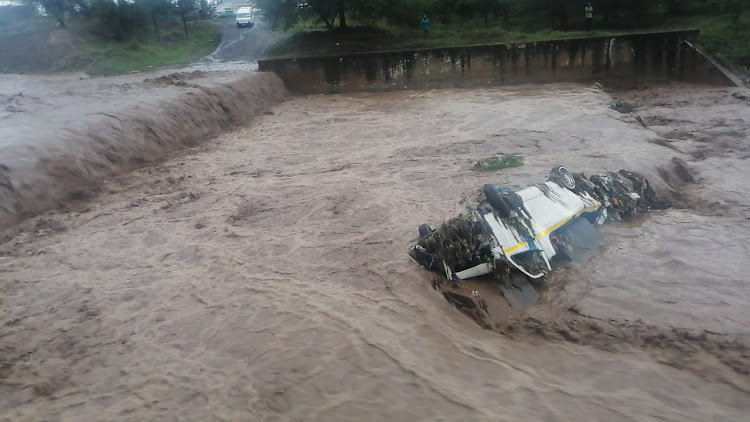 A taxi was swept into the flooded Duzi River on Wednesday. All four people on board survived.
Image: Supplied/ER24

Four people were lucky to escape when a taxi was swept into the flooded Duzi River on Wednesday following heavy rainfall in KwaZulu-Natal.

ER24 spokesman Ross Campbell said that the taxi was driving on Barnsley Road, in the Camps Drift area of Pietermaritzburg.

"Flash flooding from the heavy rain in the area meant the normally calm stream had burst over the top of the bridge, taking the taxi with it," he said.

"Luckily a series of concrete bollards caught the vehicle before it dropped further over into the deeper water."

Four people were lucky to survive after a taxi was swept into the Msunduzi River after heavy rainfall in KwaZulu-Natal. The vehicle was swept off a road in Camps Drift, Pietermaritzburg, on November 13 2019.

Campbell said two men were able to climb to safety while the vehicle was up against the bollards. Two others - a man and a woman - were taken by the river.

"By the time ER24 were on the scene just before 6pm, [SAPS] search and rescue had managed to pull the two others from the reeds further down the river," he said.

All four were treated for minor cuts and abrasions. The woman, who had been in the water the longest, was suffering from mild hypothermia and had to be taken to hospital for further treatment.

Hundreds of community members of eMpolweni, between New Hanover and Pietermaritzburg in KwaZulu-Natal, have been left destitute.
News
1 year ago

A tornado left a swathe of destruction in New Hanover and Greytown, north of Pietermaritzburg, on Tuesday.
News
1 year ago

Rain ravaged KwaZulu-Natal is in for more torrential downpours, the possibility of localised flooding, mudslides, destruction to property and further ...
News
1 year ago