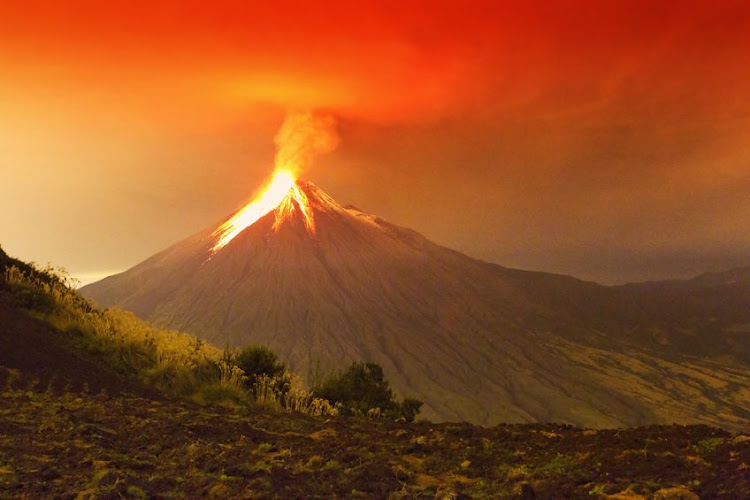 SA sits on top of a column of hot treacle-like material deep inside the Earth. Such hotspots often cause volcanoes, but the crust in SA is different and has instead led to plateaus at high altitudes.
Image: ammit / 123rf

Four years ago, a group of scientists headed off to the natural springs near the village of Bongwana in KwaZulu-Natal.

They were equipped only with funnels and hosepipes but they were hoping to solve a mystery that had puzzled scientists since SA was first mapped: the origin of flat “tablelands” such as the highveld and the presence of unnaturally hot rocks beneath the surface.

Four years later, the geoscientists announced last month that SA sits on top of a column of hot treacle-like material deep inside the Earth, and that this “hotspot” has pushed up large areas of land which sit like “buoyant lids”.

The study, published in the journal Nature Communications and led by geoscientist Stuart Gilfillan from the University of Edinburgh, found that carbon dioxide-rich gases bubbling up through the natural springs originate from the hotspot.

Such hotspots often cause volcanoes, but the crust in SA is different and has instead led to plateaus at high altitudes.

“We wanted to look at the source of the carbon dioxide that was making its way through the Bongwana Gas Fault,” Gilfillan told TimesLIVE.

While the area had been mapped in 1911 and the springs had cultural significance for local populations long before then, no-one knew where the gas came from. The scientists knew that analysing its chemical make-up will solve the mystery.

In the 1920s and 30s, a bottling company for beer and fizzy drinks took advantage of the natural source of carbon dioxide and operated a factory in Bongwana, according to the Council for Geoscience, which was part of the nine-day field trip in 2015.

Samples in 1922 returned carbon dioxide percentages of 98.3% and 97.6%, but Gilfillan said the emissions had never been tested for naturally occurring noble gases such as helium and neon.

We wanted to look at the source of the carbon dioxide that was making its way through the Bongwana Gas Fault.

Gilfillan said his team held funnels over the springs and “pushed the gas through copper tubes which were then sealed off with crimps and welded closed before being freighted to Scotland”.

Tests detected variants of helium and neon which matched the composition of the deep mantle, a rocky layer 1,000km below Earth's surface.

The findings provide the first physical evidence that southern Africa lies on top of a plume of abnormally hot mantle, which had until now only been theorised using computer modelling of seismic data.

“The presence of those rare gases fingerprint the source of the carbon dioxide, so now we know for sure that there is a hotspot beneath the crust,” said Gilfillan

Examples of hotspots that generate volcanic activity exist in Hawaii, Iceland, Afar in Ethiopia, and Yellowstone National Park in the US.

But in SA the hotspot pushes the crust upwards, which also explains why rocks beneath the region are hotter than expected.

“What we have in SA is that the crust and rocks are very old. The craton [the earth’s crust and uppermost mantle] consists of very old rocks, and the hotspot in the mantle beneath it pushes it up,” said Gilfillan, explaining that if the crust was “thinner and younger”, volcanic action would occur.

“A hotspot can break through and induce melting of the oceanic crust and that causes volcanism, but in SA, you have this big lid keeping the heat down there. It’s not enough to generate magma or cause a volcano but instead it props up a ‘lid’, in other words, keeps it buoyant.”

University of KZN geologist Tesfaye Kidane Birke said the new findings were significant. “We now have direct supporting evidence that relates SA’s unique geomorphology or landscape to the deep structure of the mantle beneath it.”

The earthquake in KZN in October “in fact reinforces the notion of existence of plume in the mantle beneath SA”, he said, and “going forward we must work to look for more geological and geophysical evidences to substantiate the proposed explanation.”

Gilfillan’s team travelled to Bongwana at the invitation of the South African Centre for Carbon Capture and Storage. CCS is the process of capturing waste carbon dioxide — usually from big emitters such as cement factories — and depositing it where it will not enter the atmosphere, often in an underground geological formation.

My Brilliant Career: Avid astronomer preaches the gospel of science

Australian bushfires wipe out half of koala colony, threaten more

Bushfires have wiped out about half the koalas living on a coastal reserve in New South Wales, experts estimated on Friday, as a record number of ...
News
2 years ago