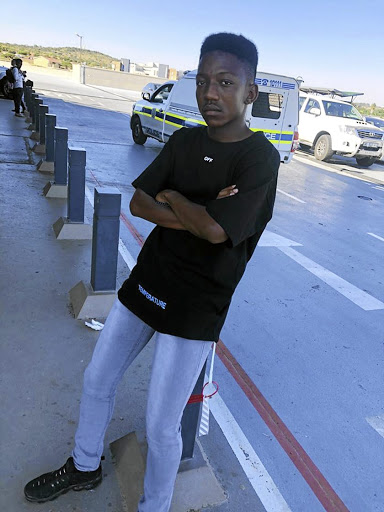 Grade 12 pupil Thoriso Kgomo was murdered, allegedly by a 17-year-old who was on bail for rape and had also been charged with assault.
Image: Facebook

A teenager accused of several crimes, including the murder of a grade 12 pupil, has caused a stir after he boasted on a video that he would get out of jail and cause havoc.

Sowetan reports that the 17-year-old suspect from Seshego, Polokwane, in Limpopo, was arrested last week for the murder of an 18-year-old pupil while on bail for rape.

On Wednesday, a video of him in his prison cell in Polokwane surfaced on social media in which he vowed to come out soon because he was “untouchable”.

In two separate video clips posted on Facebook, the teenager can be heard saying he will be back for the second time from prison.

“Round two, I have been arrested for the second time. You know what guys, [life] inside prison is tough. You thought life was easy. However, I am going to be fine, I'm coming back soon and I will show you sh*t,” he said with a smile.

In another (19-second) video clip, the suspect is seen filming his prison cell.

“I'm back again. This is my bed. I'm feeling comfortable and we do things other people fail to do here. Do you know this place? This is my home,” he said.

The suspect appeared on Tuesday in the Seshego magistrate's court in connection with the brutal murder of Thoriso Kgomo.

Kgomo was a grade 12 pupil at Northern Academy School in Polokwane when he was attacked and stabbed, allegedly by the suspect, at Zone 3 Seshego on January 2. He was taken to hospital in a critical state and succumbed to his injuries on Sunday.

A pupil from Northern Academy in Limpopo didn't get to celebrate his results with fellow matrics on Wednesday. He was murdered days before their ...
News
1 year ago

Both the police and the juvenile centre where the suspect was held have passed the buck about where the video was filmed.

Brig Motlafela Mojapelo said the video wasn't taken in police cells, but at a centre where the suspect is being held.

“We don't allow inmates to enter our police cells with cellphones,” Mojapelo said.

Witness Tiva, Limpopo's department of social development spokesperson, said the videos were not recorded on the premises of the Polokwane Secure Care Centre as the minor was not yet in their custody.

“If you look at the clothes he is wearing in the video, those are casual clothes. We ensure that all minors in our care are in uniforms to distinguish them in case of an escape.

“We do not allow minors or employees in our facilities access to cellphones or any form of contraband and illegal substances.”

Mojapelo confirmed that Kgomo was attacked and brutally stabbed, allegedly by the suspect.

“The incident was then reported to the police and on arrival at the hospital, the victim was found with severe stab wounds and was unable to speak. The suspect was arrested on Sunday, hiding in Seshego Zone 3,” Mojapelo said.

“The charge has since been changed from assault with intent to cause grievously bodily harm to murder.

“The suspect, who is a school dropout, is facing a charge of rape and is scheduled to appear in the Seshego magistrate's court next month. He was out on bail at the time this gruesome murder was committed.

“He also has another case of assault with intent to do grievous bodily harm that was committed in Lebowakgomo,” he said.

'He must be convicted, if he is guilty,' say family of KZN massacre accused

Family members of the man accused of killing six people in Mpumalanga, outside Pietermaritzburg, say he must be convicted if he is guilty.
News
1 year ago

A police investigation into the disappearance of a 12-year-old girl who was reported missing in Cape Town has led to the arrest of a 48-year-old ...
News
1 year ago

Durban mayor Mxolisi Kaunda has appealed to police officers not to use their weapons to deal with personal issues. This after a metro policeman was ...
News
1 year ago