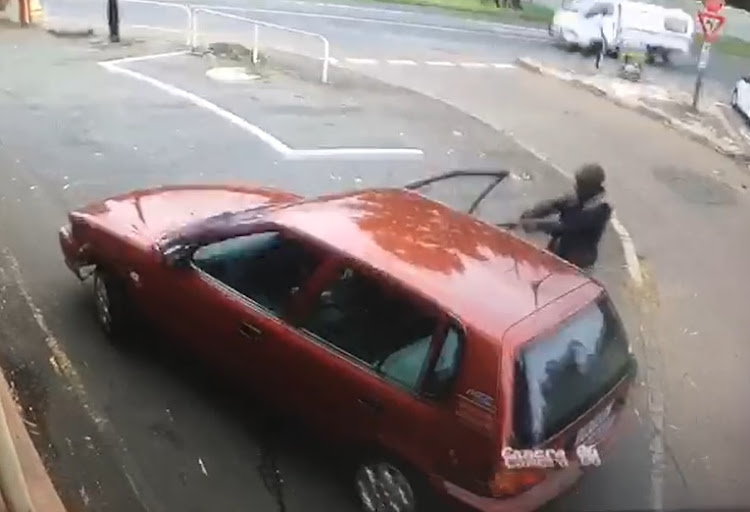 A screenshot from CCTV camera footage shows a man cocking his gun and pointing it at a 69-year-old woman in Caversham Road, Pinetown, on Monday afternoon.
Image: Screenshot

Police are searching for a man who hijacked a 69-year-old woman's vehicle in Pinetown, west of Durban, on Monday.

CCTV camera footage indicates that the incident occurred at 4.53pm in Caversham Road and took 41 seconds from the time the man appears on screen to the time he makes off with the vehicle.

The footage shows the man running towards the elderly woman, who is parked in her maroon Toyota Tazz near what appears to be business premises.

[WATCH] An elderly woman (69) was hijacked at gunpoint on Caversham Road in #Pinetown on Monday. Police say the incident occurred at 5pm. No arrests have been made. @TimesLIVE #Hijacking pic.twitter.com/pWLomTplds

The man approaches the driver's door and can be seen reaching inside the vehicle, presumably for the keys in the ignition, while holding a gun in his other hand.

A woman standing nearby makes a run for it after the man pulls out the gun.

After a few seconds and an exchange of words, the agitated man appears to cock his gun and readies himself to fire a shot into the vehicle.

He then pulls the 69-year-old woman out of her car by her hair.

The victim, however, is not willing to give up without a fight and puts her hand into the vehicle. The man drives off and the woman is thrown to the ground.

“It is alleged that on January 20 2020, at 5pm, a 69-year-old woman was at Caversham Road in Pinetown when she was approached by an armed man. At gunpoint, the suspect robbed her of her vehicle, before fleeing the crime scene in it,” said Mbele.

'Get out of the car,' suspected hijackers shout before killing pastor’s daughter

Police have opened a case of hijacking and theft after a Ram courier vehicle was robbed of cellphone packages in Kempton Park, east of Johannesburg, ...
News
2 years ago

Cape Town police are on the hunt for crooks who hijacked a traffic police patrol vehicle just after midnight on Tuesday.
News
2 years ago