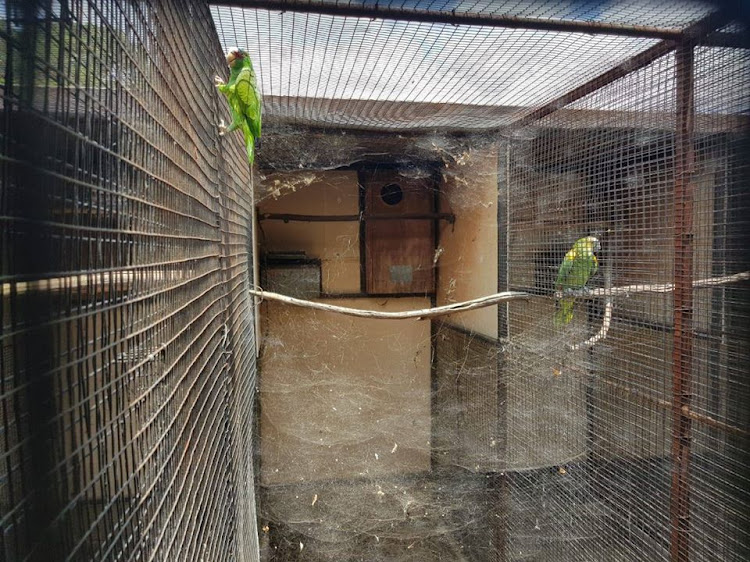 One of the cages full of spider webs.
Image: Randburg SPCA

The Parrot Breeders Association of SA (Pasa) has confirmed the resignation of a senior official after the gruesome discovery of 150 dead parrots at his home in Johannesburg.

Other parrots were allegedly found during an inspection by the Randburg SPCA in “dirty and parasitic” conditions.

“Please note that [the official] has resigned as a member of Pasa, said Ben Minnar, chairperson of the organisation in a post on its Facebook page on Thursday.

“We stand by our strict code of conduct applicable to all our members and will not tolerate any breach thereof by anybody associated with Pasa,” the organisation said in an “urgent announcement” posted on its website.

The SPCA said in a statement that it had executed a search and seizure warrant at the official's home on Monday, accompanied by a Johannesburg wildlife veterinarian and police.

“The Inspectorate seized 20 animals, for being kept in abhorrent conditions and which in the opinion of the accompanying veterinarian, required medical intervention,” said the SPCA.

“It is an offence to keep any animal in a dirty or parasitic condition in terms of the Animals Protection Act.

“Parrot cages were infested with large rats, and some enclosures were found to be obstructed with spider webs to the point where birds were unable to fly inside the enclosure and had to resort to climbing.

“The owner was found to be in possession of three Lesser Bushbabies, without being in possession of a permit. More than 150 dead parrots were seen on the premises in what can only be described as a horrific scene,” said the SPCA.

The official may have to face criminal charges.

“The animals were found to be kept under offensive conditions, and we will be dealing with relevant role players, as people must be held accountable for the negligence observed at the premises. No person is above the law,” said inspector Shiven Bodasing of the Randburg SPCA.

Brody was found in a manhole three days after the incident, with severe injuries
News
1 year ago

The puppy had to have its leg amputated.
News
1 year ago

The National Society of SPCAs has laid criminal charges against a game farm facility outside Klerksdorp after finding tigers being kept in unhygienic ...
News
1 year ago