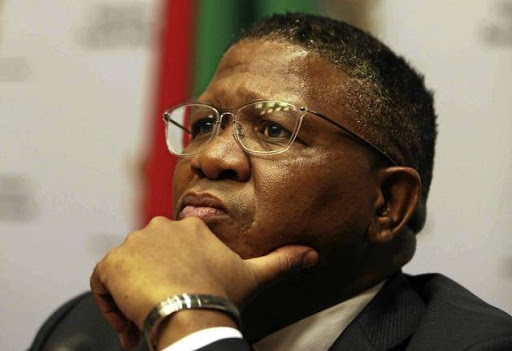 Transport minister Fikile Mbalula was at the Westgate magistrate's court for the appearance of four suspects in connection with the burning of trains.
Image: The Times/Esa Alexander

On Sunday Mbalula visited a house in Heidelberg, south of Johannesburg, that was used as a melting factory for cables stolen from the Passenger Rail Agency of SA (Prasa). Two people, one allegedly employed by Prasa, were arrested for cable theft.

“The suspects were caught in action, melting rail train cables and other train components at their illegal 'cash for scrap' operation,” the transport department said in a statement.

In another incident, four people were arrested on Friday for burning trains at the Braamfontein train yard in 2019. Mbalula was at the Westgate magistrate's court waiting for them to appear in the dock on Monday.

The department said R1bn had been lost due to the torching of trains, vandalism of power stations, public disorder, train collisions and floods.

“We call upon the criminal justice system to leave no stone unturned in ensuring these criminals face the full might of the law by imposing the maximum penalty permissible in law,” said Mbalula outside court.

The United National Transport Union (Untu) said in a statement on Monday that despite there being two court orders directing Prasa to implement “drastic” measures to improve the safety of staff and train commuters, its members continued to suffer at the hands of criminals.

According to the union, one of its members was robbed on Sunday night while taking authority from a train control office to continue with a train on a route in Durban.

“Last week the drivers of two trains averted a collision at Duffs Road in Durban, the result of the continuous working under manual authorisations,” Harris said.

In another incident cited by the union, a train security guard was held at gunpoint and robbed of personal belongings at Hercules station in Pretoria.

Recently a train driver was stabbed at the Belville station in Cape Town. There were no security guards or members of the rapid rail police in sight, the union said.

“The reality is that with every passing day, criminals continue digging out signalling cables in broad daylight. This results in the cancellation of trains or long delay, which result in mobs of angry commuters attacking train crews,” said Harris.

Untu said in 2018 Pretoria high court Judge Cassim Sardiwalla ordered Prasa to adhere to the safety requirements of the RSR and acknowledged the importance of Prasa’s obligation to ensure  it provided a safe and reliable service for workers and commuters.

“The judge described this case as a matter of national importance and availed himself to  manage the progress. On June 20 2019 Judge Sardiwalla issued a second court order that must be read in conjunction with his first order.”

According to the second order a, final compliance assessment conference will be convened to assess the general compliance of Prasa and the RSR before court on February 26.

The RSR had, in the meantime, extended Prasa’s safety operating permit by another three months, “despite the fact that Prasa had to close various routes nationwide temporarily  because of the destructive vandalism of assets after the previous interim board terminated the contract of 20 security companies without having an alternative measure in place,” said the union.

“To date Prasa’s administrator, Bongisizwe Mpondo, has also been unable to appoint new security companies to prevent the ongoing vandalism.

“Untu had hoped the court would be able to intervene where the political will to find a solution is lacking, but sadly the situation only worsened and Prasa is now in the worst state that it has ever been in,” said Harris.

Two men will appear in court on Monday in connection with the theft of railway lines worth R8m.
News
2 years ago

Scopa wants former Prasa board members to be declared delinquent

Parliament's public accounts watchdog Scopa wants the former directors of the Passenger Rail Agency of SA declared delinquent so that they are never ...
Politics
2 years ago