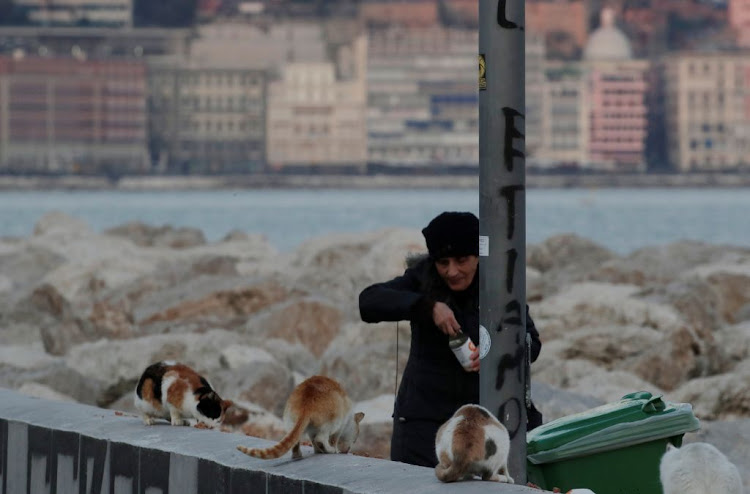 A women feeds cats in Naples as Italy remains under a nationwide lockdown in a government decree that ordered Italians to stay at home amid the coronavirus outbreak. A feral cat association won a court bid to be declared an essential service to allow them to feed the animals in Durban.
Image: REUTERS/Ciro De Luca

Cats of Durban, a non-profit organisation involved in the feeding of feral cats, secured a last-minute Durban high court order on Thursday, allowing feeding to continue during the lockdown.

This was after some of its members went to police stations and were told their “essential service” forms, authorised by the organisation in terms of lockdown regulations, would not be recognised and they would most likely be arrested if they left their homes.

The application, which was argued by advocates Andre Stokes and Damien Bond before acting judge Rob Mossop, was not opposed by the minister of co-operative governance and traditional affairs or the minister of police.

In her affidavit, Cats of Durban secretary Niki Moore said the organisation was established about five years ago and had about 40 subscription-paying members.

Its purpose was to alleviate the plight of thousands of feral cats in the greater Durban area and it supported sterilisation and feeding programmes.

Essential services, in terms of the disaster management regulations, included “animal welfare” and, as such, “we fall squarely within this definition”, read the affidavit.

“Our members, on a voluntary basis, feed feral cats and entire colonies to ensure that they are protected from starvation and malnutrition which is often associated with debilitating disease and animal suffering.

“Cats that are sterilised and returned are also inoculated against rabies, so we provide a valuable contribution to curbing the spread of the disease.”

She said feeding took place regularly at members' own time and expense.

“It is a voluntary service. The SPCA does not perform any of these functions.”

Moore said feral cats were valuable in keeping the rat population down.

The organisation’s own experience was that when the cats were not fed, they scrounged through bins looking for scraps and were driven to places where they were not wanted.

“They are subjected to cruel treatment. Some have been poisoned and beaten.”

She said once feral cats were accustomed to being fed, they sometimes lost their “instincts” to find their own food and without feeding during the lockdown, they could suffer slow starvation.

“We have issued our cat feeders with the necessary letters. They will travel directly to and from the feeding locations alone. Invariably there are no other people present and no contact with anyone else.

“But it has been difficult to establish the attitude of the police. Officers at Durban North, Durban Central and Hillcrest police stations indicated that even with the letters, feeders would be detained.”

Judge Mossop granted the order, declaring that the organisation provided an essential service. He ruled that feeders were entitled to travel outside their homes provided they were in possession of the signed authorisation.

In virus-stricken Wuhan, animal lovers break into homes to save pets

A 43-year-old native of Wuhan, a central Chinese city ravaged by a coronavirus outbreak, said he climbed up rusty pipes to the third-floor balcony of ...
News
1 year ago

SANParks closes all its facilities as lockdown looms

SANParks has announced that it will, from Wednesday, be closing all its tourism facilities during the lockdown period
News
1 year ago