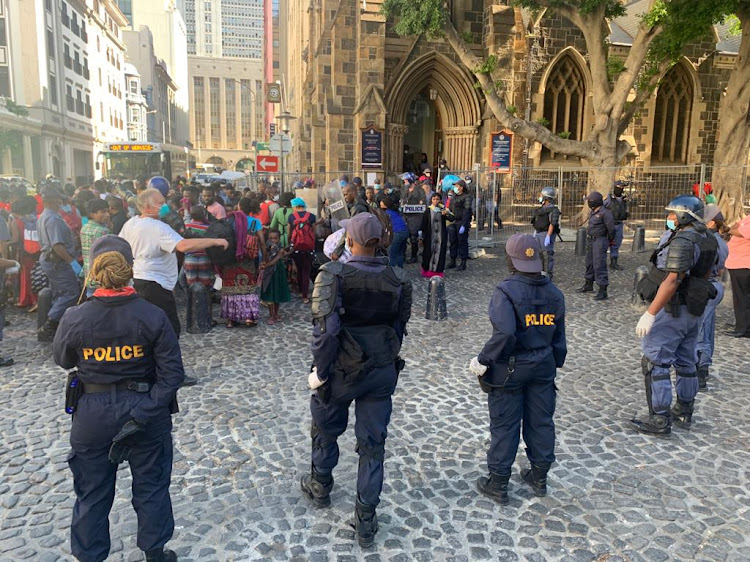 The scene outside Central Methodist Church on Greenmarket Square, Cape Town, after armed police stormed it on April 2 2020 to remove hundreds of refugees living inside.
Image: Esa Alexander

Scores of armed police in battle gear stormed a church in the Cape Town city centre on Thursday afternoon to remove hundreds of refugees who had been holed up there for months.

Using specialised equipment, it took them about three minutes to demolish the old wooden door at the main entrance.

They then used a sledgehammer to shatter an internal glass door and ran into the church, shouting at the refugees to get down.

BREAKING: Using shock and awe in a well executed operation police managed to gain entrance to the Central Methodist Mission in Cape Town. Minutes earlier the refugees were seen taking in three trollies filled with supplies, it seems in anticipation for a prolonged seige. pic.twitter.com/SEnAF7GgFc

No shots were fired, and no-one appeared to have been injured in the assault.

Refugees from inside the church were led out, carrying bundles of their belongings, into a fleet of Golden Arrow buses and police vehicles.

Masks and gloves are being distributed to refugees as they board busses. #refugees #Day7 #COVID19 #LockdownSA pic.twitter.com/LcxRpNa5jV

Children were traumatised and crying and adults argued with police, afraid they would be separated from family members.

Medical staff and firefighters were standing by in case the church caught fire or someone got hurt.

The minister in charge of the church, the Rev Alan Storey, looked on in concern as the doors were broken down, and as the refugees emerged.

Members of the group of #refugees held up in the church arrive with three trollies packed supplies including bread and water, this as the police make final preparations for the operation to remove them from the church. #COVID19 #LockdownSA #Day7 @TimesLIVE pic.twitter.com/H3kPWQI6ZC

The City of Cape Town mayoral committee member for health and social services, Zahid Badroodien, said the refugees would be taken to a site known as Paint City in Belrail Road, Bellville.

On Tuesday, public works minister Patricia de Lille's spokesperson, Zara Nicholson, said a marquee big enough for 600 refugees was being put up there. The site is near Tygerberg Hospital.

#Refugee representative Caroline Sheme said refugees in the church would "walk out of the country" the moment their leader JP Balous is released from prison. #COVID19 #LockdownSA #refugees #Day7 pic.twitter.com/EgqONCEHcz

Earlier on Thursday, senior police officers, health workers and home affairs officials went into the church to discuss moving the refugees during the Covid-19 lockdown.

When they emerged, they said the people inside — thought to number about 600 — had refused to leave.

Refugees moved to the church last October after being evicted from outside the UN High Commission for Refugees (UNHCR) city centre offices. They claimed to be in peril in SA, due to xenophobia, and wanted to be flown out.

The group split in December after a leadership tussle, and about half of them left. The spent several months living outside the church before being forcibly removed on March 1. Some of them are now in makeshift shelters near Caledon Square police station.

Hundreds of refugees holed up in Cape Town's Central Methodist Mission refused to leave on Thursday.
News
2 years ago

Cape Town's homeless residents, many of whom rely on the working masses for their daily bread, woke up to empty streets and high anxiety on Friday - ...
News
2 years ago

The bird’s-eye view from Metro-1, the Cape Town Metro Police helicopter, makes it clear that the government’s goal of limiting the spread of Covid-19 ...
News
2 years ago