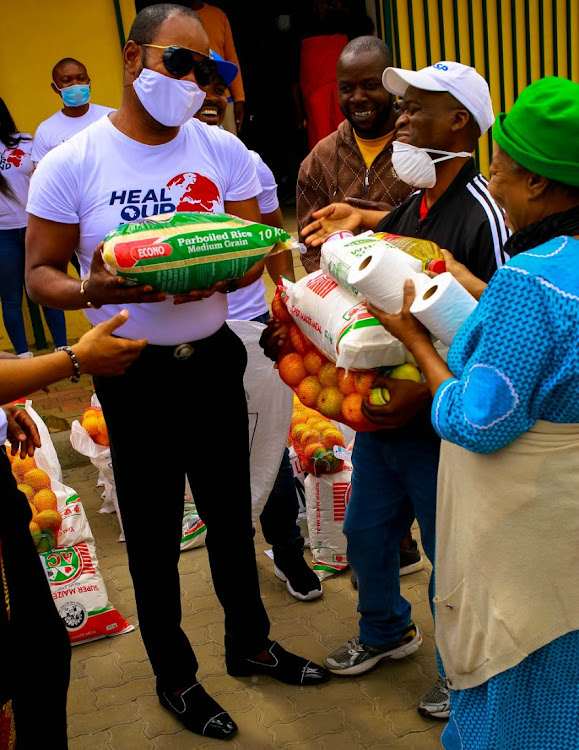 The donation, according to spokesperson Busi Gaca, was part of the church foundation's ongoing community outreach programme.

“We started this way before lockdown, but the effort has been intensified because of the great need during lockdown. This is something we do as a church every single time,” Gaca said.

She said when leaders of the church saw a need for food in communities like Soweto, they decided to contribute by donating basic necessities.

“Currently, our country, like the rest of the world, is grappling with the effects of the Covid-19 pandemic. During this time, we cannot overlook the importance of providing essential items like food to vulnerable communities that are highly impacted by the necessary lockdown.

“While the government is doing its utmost best to contain the spread of the virus and help those who are infected and affected, we have a role to play by making sure that the basic needs of our people are covered,” said Gaca.

Gaca said the foundation had, since the lockdown started, donated food in Alexandra, Tembisa and Malboro.

“We started with 500 food parcels in Alexandra. The need [for food] is growing. We have now doubled the number [in Soweto],” Gaca said.

She said the church would identify other communities in need. “The initiative has been well received, our pastor does not want to stop. It's a blessing to be able to do that.

“The church has done a great job in ensuring that it looks after people who are in need. We are more grateful to Pastor Alph Lukau for this kind gesture,” said Vuyiswa Gumede, community leader in Orlando West.

She said the food would be distributed to families that had been identified by co-ordinators in the Soweto area.

Lukau faced a barrage of public censure when a video showing him allegedly “resurrecting” a man from the dead, went viral on social media last year.

At the time, the church claimed to have been the victim of an “unwarranted and sustained attack” fuelled by bias, speculation and “a blatant” refusal to accept “certain irrefutable facts”.

“At no stage did the pastor [Lukau] claim that he resurrected the person shown in the video, who was identified by his family as Elliot,” said the church.

The Johannesburg magistrate’s court has provisionally withdrawn charges against two people arrested in connection with the "resurrection hoax" at ...
News
2 years ago

Celeste Lukau, the wife of flamboyant pastor Alph Lukau, has likened her husband to Jesus, saying he has been crucified for helping heal others.
News
3 years ago

One of the two people implicated in the hoax resurrection video flighted in February by pastor Alph Lukau's Alleluia Ministries International, shares ...
News
3 years ago