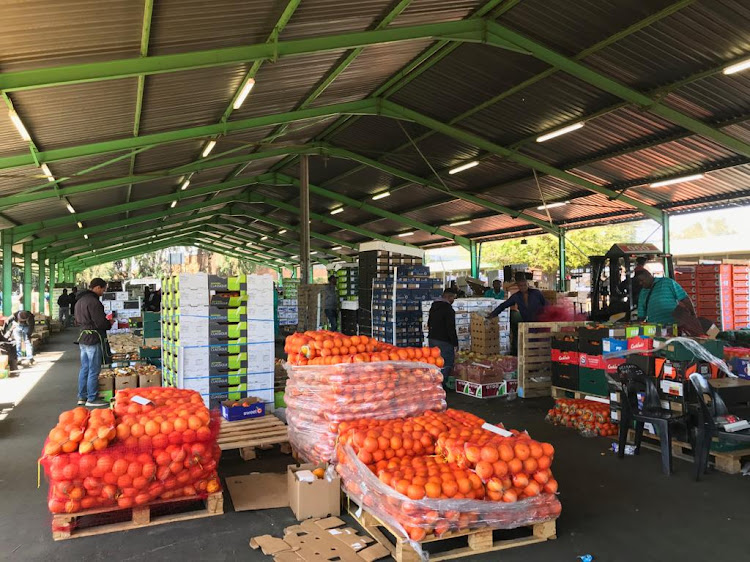 One in three potatoes in South Africa is sold by a street trader. Many traders regularly travel to the City Deep market in Johannesburg to purchase their stock.
Image: Kgaugelo Masweneng,

Street traders are central to food security in Johannesburg but since being declared an essential service under lockdown, street trade in SA’s biggest city has returned to uneven ground.

Five minutes make all the difference to Yeoville’s early morning harmonies. Still wrapped in inky darkness at 4.30am, the streets are almost completely quiet. Animals make the only sounds. A scurrying rat here, the song of an early bird there.

By 4.35am, the tone has changed. Gates to apartment blocks creak open, and the crunch of rubber soles treading on tarmac announce the morning commutes of essential workers.

On some days, two of those pairs of feet belong to lifelong friends Mercy Mokgehle and Zandile Mbatha.

Mokgehle has sold vegetables in the Yeoville Market since 2004, and Mbatha for almost a decade longer than that. When South Africa’s nationwide Covid-19 lockdown began on March 27, they feared the worst.

“Remember, we live hand to mouth,” says Mokgehle. Without income or savings, they began to feed their families what vegetables were left over in their stalls.

Since April 2, however, when SA took the lead with countries like Peru and Ghana in declaring street traders an essential service during Covid-19 lockdowns, Mokgehle and Mbatha have resumed their semiweekly, predawn trips to the market in City Deep, south of Johannesburg, to replenish their stocks.

The two pay R30 for a trip on the back of a bakkie, packed shoulder-to-shoulder with other traders wrapped up against the autumnal chill. They are wary of the proximity – Mbatha makes sure everyone is wearing their face masks – but at this time of day during the lockdown, safer transport is impossible to come by.

Joburg’s skyline, etched out in Berea and Hillbrow apartment lights, whips past as they leave the city behind and cross into its mining belt. They pass trucking yards, stacks of shipping containers, ghostly, mustard-coloured mine dumps, and eventually arrive at the City Deep market.

A city within a city, the market is a logistical behemoth. The avenues of potatoes, boroughs of onions and precincts of tomatoes that make up its warehouses have travelled along food supply chains that stretch from SA’s countryside and eventually on to its dinner plates.

It is difficult to overstate the importance of the roles street traders like Mokgehle and Mbatha play in these supply chains, and in SA’s food security more broadly.

By the Quarterly Labour Force Survey count, almost 500,000 people were involved in the informal retailing of food in SA before the onset of the coronavirus pandemic. According to Potatoes South Africa, almost one in every three potatoes in SA is sold by a street trader.

It’s no different in Johannesburg. Around half the R7.5bn in fresh produce sold every year at City Deep goes to informal traders, according to Marc Wegerif at the University of Pretoria’s development studies department. An African Food Security Urban Network survey found that almost nine in every 10 Johannesburg households usually get their food from informal markets or street traders.

Beyond feeding the city, there are other ways in which the informal food system is well geared for the Covid-19 moment, according to Caroline Skinner, a senior researcher at the University of Cape Town’s African Centre for Cities.

Often located outdoors and in impoverished communities, informal food retailers – spaza shops and street traders – cut the distance people need to travel to buy food, keeping them off crowded public transport and out of supermarket queues, for instance.

Mokgehle piles a trolley high with carrots, tomatoes, broccoli, cauliflowers, green peppers, cabbages, pumpkins and okra. Business has been unexpectedly good since she began trading again in early April. The limited number of trading permits being issued by the municipality has meant less competition, and she is earning up to three times as much as she was before the lockdown.

Mokgehle’s lockdown fortune is only one side of the coin, however.

On the other side is Linah Malefahlo, who shares a rundown room with her youngest daughter and three grandchildren a few blocks from where the Yeoville Market has reopened.

Unable to secure one of the limited trading spaces in the Yeoville Market, Malefahlo usually sells vegetables on the neighbourhood’s sidewalks. However, despite being granted a permit by Johannesburg’s economic development department to trade during the lockdown, city officials have refused to allow her to trade on the sidewalks.

She has resorted to selling small bags of wild spinach covertly on street corners and, at the age of 65, running away from city officials if they arrive.

Meanwhile, Malefahlo’s stock is rotting in her yard. She has been forced to sell sacks of potatoes, for which she paid R65, to spaza shops operating deep fryers for R50.

Two central pillars in Malefahlo’s economic life have crumbled under lockdown. She cannot meet the members of her weekly stokvel and, without a steady income, she is no longer able to support her family living in rural Limpopo.

Remittances like those Malefahlo used to send every month are no longer as central to SA’s rural homes as they once were.

Economists at the University of Cape Town’s South African Labour and Development Research Unit have shown the proportion of South African households receiving remittances has decreased since 1993, when nearly one in every four homes received remittances.

Nevertheless, in cases like Malefahlo’s, the lockdown has severed life-giving economic links between the city and countryside.

“They will kill us,” says Malefahlo of the lockdown and, pointing to her grandchildren, that “these kids will do bad things because they are hungry”.

Remittances have declined as the importance of social grants to the country’s most impoverished households has grown.

The new Covid-19 social relief of distress grant will bring informal workers into that social security net for the first time.

The R350 per month, however, is “not going to cut it”, says Skinner. “It’s barely putting food on the table for two or three days.”

Contests over available trading spaces, and who can and cannot trade on Joburg’s streets, are long-standing. Exactly how many traders the city can accommodate has been difficult to establish. A lack of updated surveys means that knowing the number of people who make their living on Johannesburg’s streets and in its markets is nearly impossible. Estimates by researchers and various municipal departments and agencies range from 6,000 to 15,000.

According to research conducted by the Centre for Urbanism and Built Environment Studies at the University of the Witwatersrand, there is enough trading space to go around.

The research, commissioned by the city of Johannesburg in the aftermath of Operation Clean Sweep (when the municipality evicted around 7,000 street traders from their sites of business in late 2013), that the scale of street trade in Johannesburg “is far from the ‘explosion’ it is often made out to be" and can be accommodated if properly managed.

At the Yeoville Market, a day that started in darkness ends the same way as Mokgehle and Mbatha close shop shortly before 8pm.

Access to two of Joburg’s limited trading spaces, and having their permits honoured, means they are selling their stock again instead of feeding it as a last resort to their families.

Many others, like Malefahlo, who is furtively selling small packets of spinach on a nearby corner, have not been as fortunate.

Informal restaurants and shisanyamas have been given permission to operate under level 4 of the lockdown - but can only sell cooked food for home ...
News
1 year ago

Informal traders must be included in R500bn relief, says alliance

Informal traders should be included as beneficiaries of the socio-economic measures worth R500bn that were announced by President Cyril Ramaphosa ...
News
1 year ago