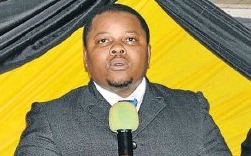 Acting AbaThembu king Azenathi Dalindyebo appeared in the Mthatha magistrate's court on Monday on charges of assault with intent to cause grievous bodily harm and pointing a firearm.

He is accused of assaulting Babalo Papu, the spokesperson and adviser of king Buyelekhaya Dalindyebo.

The acting king was accompanied by his uncles Prince Siganeko Dalindyebo  and Prince Madlomandile  Dalindyebo, his council chair and spokesperson Nkosi Thandisizwe Mtirara, and several others.

Papu and Azenathi's other uncle, Prince Mankunku Dalindyebo, were seen in the court corridors, but they did not go to the courtroom where the case was heard.

“The prosecutor and the investigating officer said there was no need to attend the case today as it will only be a postponement,” said Papu.

Azanethi, neatly dressed in a designer suit and tie, appeared calm and maintained his innocence.

“I am no criminal. I was never involved in any assault of anyone. It is just to drag my name in the mud. I know God will travel with us on this journey, as is always the case,” Azenathi told DispatchLIVE outside the court.

The case was postponed to August 5. He is out on a warning.

Azenathi's court appearance came exactly seven days after his father appeared in the same court charged with assaulting the acting king and his wife, Sikhumbulile Dalindyebo.

Buyelekhaya is accused in a criminal case of assaulting his son, whom he has since disowned, at the Bumbane great place in March. However, he has turned to the civil court to apply for an order to remove Azenathi and several of his supporters from his palace.

The assault case was postponed to December 7 while the lawsuit to have Azenathi removed from the great place is set down for June 30.

Azenathi said there would be an AbaThembu imbizo in Bumbane on Friday.

“All AbaThembu are invited to attend and it is there where we will talk further on issues affecting AbaThembu,” he said. ​

The AbaThembu Royal family says there is "nothing untoward" about King Buyelekhaya Dalindyebo wanting to do DNA test to prove whether Prince Azenathi ...
News
1 year ago

A reign that causes mainly pain.
Opinion & Analysis
1 year ago