Your granny could need that bed, says Western Cape government as alcohol cases fill up hospitals 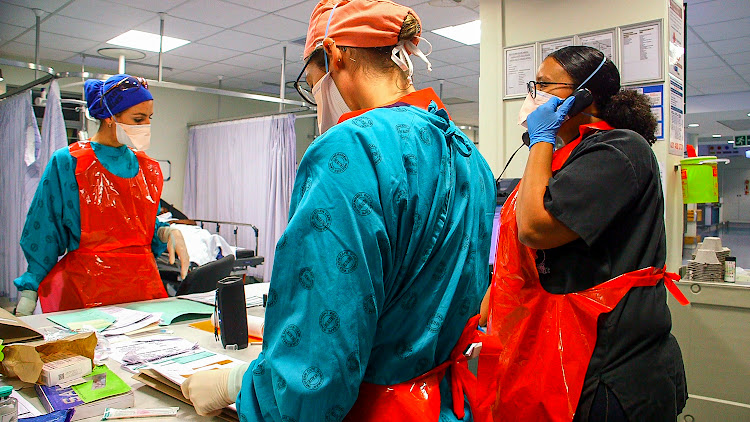 Doctors on duty at Mitchells Plain District Hospital during a busy Saturday night trauma shift. The Western Cape government says it is concerned about an increase in trauma cases linked to alcohol.
Image: Anthony Molyneaux

With the province's hospital system already under pressure from Covid-19, the Western Cape government says it is concerned about an increase in trauma cases linked to alcohol.

"A number of our hospitals have seen a significant spike in trauma cases linked to alcohol use since the sale of alcohol was unbanned on June 1," it said in a statement on Tuesday.

It added that alcohol abuse was taking away hospital beds and medical care from people who needed it during the coronavirus pandemic.

"Your grandmother, brother or sister could become ill with Covid-19 and require a hospital bed.

"Every single one of us has a role to play in making sure our healthcare system has the capacity to respond. Please drink responsibly and play your part. If this doesn’t happen, we will have no choice but to explore alternative steps to ensure that this happens."

The provincial government said it noted rumours that alcohol would be banned again.

"The Western Cape has not made any announcements to this effect, and we have not received any indication from the national government that this is planned."

Meanwhile, the provincial government also announced on Tuesday that it had opened its testing and triage centres at Groote Schuur hospital.

The site is one of 18 in the first phase that will provide a dedicated space to screen, triage and test patients.

"These centres help to ease the pressure on our hospital emergency care centres, while also separating testing and triaging from the rest of the hospital patients," it said.

"The province has now also begun phase 2 of this project, which will create 14 new temporary testing and triage sites in the metro, and an additional 20 in our non-metro areas."

On Tuesday, the province had recorded 33,892 confirmed Covid-19 cases and 20,791 recoveries. It also recorded an additional 53 deaths, bringing the total number of Covid-19 related deaths in the province to 851.

The Western Cape's statistics differ from the national health ministry's largely because they are taken at different times of the day.

This week’s booze binge has set SA back in its fight against Covid-19.Across the country, a massive surge of people in hospital emergency rooms with ...
News
1 year ago

Large crowds of unruly teenagers drinking in public in Nelson Mandela Bay have caused a big headache for police — with stun grenades necessary to ...
News
1 year ago

There have not been any calls to the national coronavirus command council to reinstate the ban on alcohol sales, the presidency said on Monday ...
News
1 year ago